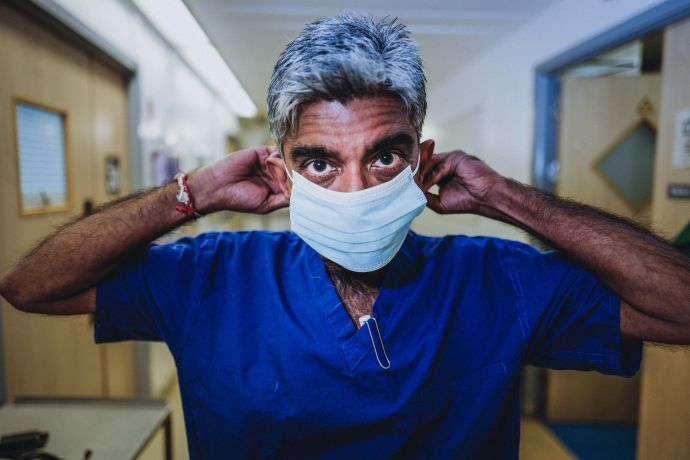 Infectious diseases consultant Dr Sanjay Bhagani says that when the first group of COVID-19 patients were admitted to the Royal Free Hospital, he was surprised by how differently the virus behaved compared with other closely related diseases such as SARS and MERS.

The first patients, who were admitted this week two years ago, didn’t become unwell – they stayed in hospital for isolation purposes only.

Sanjay, who has featured in the BBC’s Hospital series, said: “We were essentially babysitting them – just making sure they were well and were no longer infectious before we could send them home.

“However, one patient in that first group suddenly did become unwell and then deteriorated to the point he needed to be transferred to ICU and placed on a ventilator.”

Sanjay said that although the patient recovered fairly quickly after that, it was a wake-up call that this was a serious disease.

He said: “The pathology of the disease was different from what we expected. With other similar viruses, if you are going to get sick, it happens soon after exposure. But this patient was only starting to get unwell in the second week, so that was something new and unexpected.”

By that time, the COVID-19 outbreak in Italy was becoming serious, with hospitals in Lombardy starting to become overwhelmed.

“We were looking at Italy and could see that we were two to three weeks behind them – we knew that what had happened there was going to happen here too,” said Sanjay.

This was also the first time that doctors here at the Royal Free London had access to reliable information about the virus and how it affected patients.

Sanjay said: “The Italian doctors were providing valuable information so we could be as prepared as possible when more patients began arriving at our hospitals. And that sharing of information with international colleagues has continued – we recently provided information about the Omicron variant to doctors in France.”

Sanjay says despite all the difficulties the pandemic has brought, there have been some positives.

“It was really heartwarming to see colleagues from different specialities come together to work as one huge team with the single aim of trying to save as many lives as possible,” he said. “We all worked tirelessly and focused our attention to finding treatment options and learning more about who might benefit from those different therapies.

“And now, as we come through the Omicron wave, and COVID-19 inevitably becomes endemic in our communities, we need time to reflect and heal the NHS and all who work in it, and prepare for the next pandemic, be it another potent variant or another virus.”

A new episode of Hospital, featuring the Royal Free London, will be screened on BBC Two in the spring.