A revolutionary skin grafting technique that could reduce the number of patients undergoing invasive surgery and dramatically cut recovery times is being trialled at the Royal Free Hospital.

The trust’s plastic surgery team has become the first in the country to trial the new CelluTome procedure, which allows patients to be treated for unhealed wounds without the need for surgery or anaesthetic.

A traditional skin graft involves surgically removing healthy skin from a donor site elsewhere on the body before applying it to the affected area, usually while the patient is under general anaesthesia.

CelluTome, however, uses a combination of suction and warmth to cause the skin’s surface to blister until it can be removed and captured on silicone gauze, which is then cut into strips and applied to the wound site. These small particles of skin fuse to the wound area and 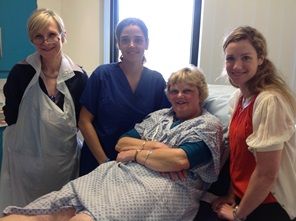 stimulate skin regrowth. The procedure can be carried out in an out-patient clinic in just an hour and instead of a donor site wound patients are left with a patch of red skin which heals completely within two to four weeks.

The treatment, which can heal wounds up to the size of a 50p piece, could have a dramatic impact on the treatment of elderly patients. Skin grafts can be problematic for older patients as the skin is thinner and the donor site sometimes fails to heal.

When an aluminium ladder fell on Gillian Mayer’s leg she had no idea about the depth of the wound. Though painful, there was hardly any blood so she cleaned it up and put on a dressing. Nearly three weeks later however the wound was not healing. It was during an appointment at the plastic surgery clinic at Mount Vernon Hospital, where she is being treated for skin cancer, that a doctor referred her to the Royal Free Hospital, where she underwent the CelluTome treatment.

“I could only feel a slight pin pricking,” said Gillian from Hillingdon. “The heat from the machine was not uncomfortable at all.”

Two weeks after her out-patient procedure Gillian said her wound was healing well.

She added: “I feel privileged to take part in this trial. It’s amazing how the treatment works. I was lucky to be in the clinic at the right time.”

Following an operation for a burst appendix in 2009, John Zazzera had spent five years with a surgical incision in the middle of his stomach that had refused to heal. However, after years of regularly attending the Royal Free Hospital to have his dressings changed, a nurse recommended him for the CelluTome trial.

“It’s had a real impact on my life, it has been a great relief,” said the 84-year-old from Highgate. “It is my hope that it will soon have healed completely and I can get back to normal. I would like to be able to go for a swim and do a bit of exercise, which I have not been able to do. I’m certainly looking forward to being free of it.”

The treatment can also be used to get younger patients back on their feet.
When 19-year-old Hilal Bura from Harrow and Wealdstone injured his knee after falling off his bike in June this year he was told that it could take from six months to a year to heal.

“I couldn’t even walk,” he said. “I had to stay in bed all the time because I couldn’t bear the pain.”

But after being referred to the Royal Free Hospital in July and undergoing the CelluTome treatment just a few months later he is now back on his feet.

He said: “I’m really happy with my recovery. I can go out and I can ride my bike and I am just starting to play football now.”

Nicola Bystrzonowski and Nadine Hachach-Haram are the only two surgeons in the country trained in the use of CelluTome.

Mrs Bystrzonowski said: “It’s a relatively pain-free technique that allows patients to be treated in an out-patient setting, have no scarring and walk home less than an hour later.

“CelluTome has great scope to be used on a variety of patients with different types of acute and chronic wounds. In Mr Zazzera’s case we have even successfully treated a wound that was five years old.”

Mrs Hachach-Haram added: “This could revolutionise skin wound healing for the right candidates.
“The procedure needs to be tried on more patients, coupled with a full assessment of the trial, but wider use of the technique could help reduce the pressure on theatres, provide a much less invasive treatment for skin grafting and promote faster wound healing.”

He said: “When you get older the skin gets thinner, so if you take a section of skin away there is a lower chance of it healing.This is a non-invasive way of doing this kind of grafting. Instead of having to go to the operating room and having a big scar on the donor site, this procedure can be performed on an out-patient basis.”

He added that CelluTome could save the NHS millions of pounds by reducing the number of patients forced to undergo surgery.

He said: “Going to an operating room always costs more. Sometimes patients coming in for an operation have to be here for four or five days. This is done on a clinic basis and could clearly create savings. However this is a new technique. We have to wait and make sure it stands the test of time, but the early reports are very positive.”