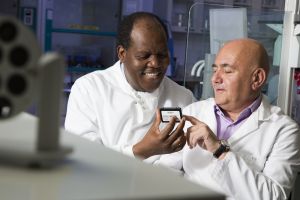 A new way of carrying out a blood test has been developed at the Royal Free Hospital and it could allow paramedics to diagnose viral or bacterial infections at the scene of an incident.

A device called a nano-probe allows clinical staff to carry out on-the-spot tests for a large variety of microbes or factors in the blood. It gives instant results, which means that paramedics, surgeons and combat medics could make a diagnosis there and then.

Currently, testing for infections involves sending a blood sample to the laboratory. An appropriate test on the sample will need to be carried out, which could involve growing a culture for a bacterial infection, or testing for the presence of an antibody for a viral infection. These tests can take a long time, can involve expensive equipment and can require highly skilled experts.

Additionally, lab staff can usually test for only one type of infection per blood sample. However, the new device will allow a clinician to test for multiple infections or factors using just a single drop of blood.

The device, which measures only a couple of centimetres in length, has a row of tiny strips made of silicon and gold. These strips, known as nanomechanical cantilevers, bend when a particular microbe is present.

Each nanomechanical cantilever can be programmed to detect the presence of a particular microbe. For example, if doctors want to test for the presence of HIV, a number of HIV antibodies would be attached to the surface of the cantilever. The HIV particles are attracted to the HIV antibodies and the two will combine. This reaction releases energy, which causes the cantilevers to bend. The higher the concentration of the HIV, the more the cantilevers will bend. A laser beam, which shines across the cantilevers, detects how much they have bent and gives an electronic reading indicating the concentration of the microbe in the blood.

A scientist at UCL, Dr Joseph Ndieyira, spent 10 years creating the device and has recently worked with Professor Massimo Pinzani, a hepatologist at the Royal Free Hospital, to develop it in a clinical setting.

Dr Ndieyira said: “Because these devices are small, they are easily transportable and so paramedics could use them to diagnose patients at the scene of an incident. They could also be useful to combat medics who may need to diagnose a casualty on the field. Although this technology has been around for some time, it has never been use in a clinical setting for the benefit of patients. The next step would be for us to have it approved for use in the ward and in operating theatres.”

Professor Pinzani added: “This device could revolutionise the way we diagnose patients. It could allow us to go around the ward, getting instant results, which would be of huge benefits to patients. For example, for patients who have just had a liver transplant, we would be able to test for liver function and for any infections, and get an immediate reading.”