A Royal Free London consultant paediatrician was shortlisted as one of the ‘rising stars’ in the NHS at the prestigious Health Service Journal (HSJ) Awards. 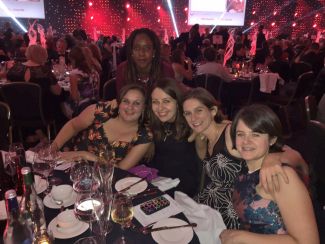 Jane Runnacles was among 12 NHS staff nominated for the Rising Star Award which was presented during a glittering ceremony at InterContinental O2 in Greenwich.

She was nominated by the Royal College of Paediatrics and Child Health (RCPCH) and although she did not win the overall award she was delighted to have been shortlisted.

Jane said:  “it was a great surprise, but a real honour to have been in the running for this HSJ award. Part of the reason why I was nominated was for my work around quality improvement at the Royal Free London where we are working on recognising children’s deterioration a lot earlier in their care and improving the communications between clinical staff and parents.

“It means a great deal to me to be nominated in the same year as Dr Peter Lachman [who won the Clinical Leader of the Year Award] as he was my mentor when I started at the Royal Free London.

“I will continue to work on quality improvement at the Royal Free London and on national projects for the RCPCH. I hope my nomination will motivate front line clinicians to keep working hard to improve how we deliver patient care.”