International pioneers of robotic surgery will be at the Royal Free Hospital later this month to talk about the evolution of robotics and how it is transforming healthcare. 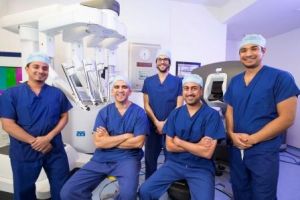 Rajesh Ahlawat, who has pioneered robot-assisted kidney transplants in New Delhi, and Craig Rogers and James Peabody, two experts in robotic kidney surgery from Detroit, are among the speakers at a symposium on robotics being held on Friday 24 March in the Peter Samuel Hall.

The ‘Future Surgery Now: Robotics at the Royal Free’ symposium will also feature a demonstration of the Royal Free’s surgical robot and patients who have benefited from robotic surgery will be talking about their care.

The event, which is being held in the Peter Samuel Hall, is aimed at exploring the future of robotic surgery at the Royal Free London. Currently the trust’s robot is used to carry out kidney cancer operations and, since last year, it is also being used to assist in kidney transplants.

The symposium has been organised by robotic surgery consultant Ravi Barod, who last year helped carry out the first robot-assisted kidney transplant at the Royal Free Hospital.

All staff are welcome to attend the event.

Image: The surgery team, who recently carried out a robot-assisted kidney transplant, with the surgical robot