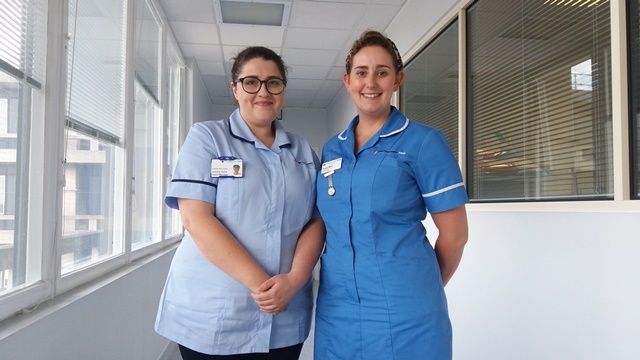 Two nurses at the Royal Free Hospital (RFH) who will treat people with Ebola in the Democratic Republic of Congo (DRC) have described it as an “amazing and humbling opportunity”.

Ward manager Jess Joyce, who is originally from Dublin, has worked for the trust for three years, and staff nurse Kirsty Metz, originally from Blackburn, Lancashire, joined the trust in April. They will be based in the large city of Goma, located in the eastern part of the DRC, for six weeks.

The Royal Free London has an education and training partnership with Medecins Sans Frontieres (MSF) but this is the first time staff from the RFH have been deployed to work alongside MSF and local staff.

There have recently been a few cases of Ebola in Goma and in response MSF are scaling up their activities and have opened a 72-bed Ebola treatment unit, in collaboration with the Ministry of Health in the DRC.

Both nurses, who are taking unpaid leave to travel to the DRC, have previously done volunteer work at the port of Calais and Jess has also volunteered in South Africa.

Jess said: “I am approaching this with a respectable amount of nervousness but you also need to keep a level of calmness. We know that we have the privilege of working somewhere where the majority of patients get to go home and we know that where we are going that may not always be the case and we need to mentally prepare ourselves for that.”

Kirsty said: “I wasn’t at the Royal Free Hospital when the patients with Ebola were treated here so being able to gain expertise out in the field is invaluable. When I told my family and close friends what I was doing the reaction was mostly positive but as the date got closer to leave people did start saying ‘are you sure?’”.

Jess added: “We know it will be tough and we know it’s not for everybody but we are there to do our best and help as necessary. We talked about it as a team on the ward and we’ve had such incredible support from our colleagues and from the hospital leadership. Everyone from the domestic staff to the consultants has wished us well and the Royal Free Charity has also supported us with a grant, for which we are very grateful.”

Breda Athan, senior matron, said: “The Royal Free London is an internationally recognised leader in Ebola treatment. Participation of staff will enhance the clinical knowledge and experience within the trust. We wish Jess and Kirsty all the very best and we are already planning for further deployments from the trust.”

On the nurses’ return to work they will not be allowed patient contact for 21 days.

According to the World Health Organisation the Ebola epidemic in the DRC has killed more than 2,000 people since the outbreak was declared in August 2018.