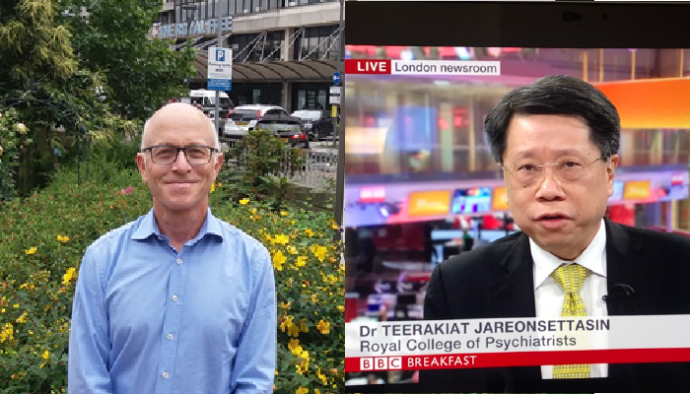 A former consultant psychiatrist at the Royal Free London, who was granted unique access to the boys trapped in the cave - following their rescue, will be giving a talk at the 2019 International Congress of the Royal College of Psychiatrists later this week (July 3), about the resilience and well-being lessons we can all learn from the grit and determination the boys displayed.

Last summer the world waited with baited breath to discover the fate of 12 boys, aged 11 to 16. The group, all members of a local junior football team called the Wild Boars and their 25-year-old assistant coach, had gone missing after setting out to explore the Tham Luang Nang Non cave. They had failed to return home after becoming stranded by rainfall. After more than a week the boys were discovered and a successful international rescue mission took place.

Dr Teerakiat Jareonsettasin, who worked as a registrar and consultant at the Royal Free Hospital in the early 1990s, is uniquely placed to deliver this talk as he was Minister of Education in Thailand at the time of the rescue and was the first psychiatrist to interview the boys and their families in depth, six months after they had settled back into their ordinary lives. He is delivering the session jointly with his former mentor, Dr Mark Berelowitz, director of the Child and Adolescent Mental Health Service (CAMHS) at the Royal Free Hospital. The former colleagues have kept in touch over the years and Dr Berelowitz has been a Thai government advisor supporting child mental health, which included visiting Thailand after the 2004 tsunami.

Dr Jareonsettasin, who was given permission by the boys and their families, to discuss how they coped, said: “I met them all together and it was clear that they had not experienced acute trauma. They told me that at no point did they seriously think they would die. Yes, they were worried about their parents but as far as they were concerned they were having a big adventure and rescue was not far away.”

Dr Jareonsettasin admitted a lot of this stemmed from the fact they mistakenly thought they were close to the surface because they could hear a cockerel crowing. They were pro-active about their escape, taking turns to use small rocks to chisel the wall, because they thought they were only about four metres away from the surface. In fact they were about 800-1,000 metres below ground and 2.5km within the cave network.

Although Dr Jareonsettasin says the boys do not appear to have suffered any damaging long term psychological effects from their experience such as anxiety, bad dreams or post-traumatic stress, it does not mean the event has not changed them.

“They said that the world now is not so real to them because when they were in total darkness for nine days in close quarters with each other, that was real. They also said that they don’t experience everyday problems in the same way – it’s all relative to them.”

The boys were also good at problem-solving and rejected the water in the pool at their feet for the water coming down the walls as they knew that it was filtered and therefore less likely to make them sick. Although they were hungry at the beginning they said their appetite reduced and they were able to survive because they had the water.

Even though there are reports of Tibetan monks meditating in caves in total darkness Dr Jareonsettasin and Dr Berelowitz believe it was the boys’ spirit of fraternity, not the occasional meditation and prayer sessions they held to alleviate the boredom, that was so important to their wellbeing, both in the cave and now they have returned to their normal lives.

Dr Berelowitz said: “What helped immensely was that they were working together and they believed they would be rescued. In the West we focus very much on individual resilience but there’s not so much about building a resilient society and that should be the aim. Also, in the era of the 24/7 news cycle and our access to social media we often mix up what is an inconvenience and what is a tragedy. The boys saw being trapped in the cave as an inconvenience but also a challenge.

“There was also no blame culture when they came out. The 25-year-old assistant coach showed great leadership skills in the cave which helped to keep the boys calm. He is still well loved within his community. He had taken the boys to the cave after a football match and they had been excited to go.”

To the very end the boys displayed practicality and showed how different their perspective was compared to what had become a worldwide news event.

Dr Jareonsettasin said: “The boys had even decided amongst themselves who should leave the cave first – simply based on who had the furthest to travel home at the other end. They had no idea the eyes of the world were on them.”

Dr Jareonsettasin concludes: “The boys told me they would be happy to go back to the caves again. They live their lives very fully.”

The Congress session takes place on July 3 – almost a year after the boys were rescued from their cave ordeal. The boys entered the cave on June 23, were found alive on July 2 and all rescued between July 8 and 10.

Discover the wellbeing lessons that Dr Berelowitz says we can all learn from the boys in the cave.