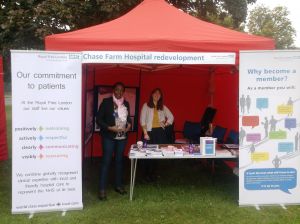 The Royal Fee London NHS Foundation Trust attended the Enfield Town and Country Show this weekend, speaking to the community about the redevelopment of Chase Farm Hospital and inviting local people to become members.

The trust spoke to over 200 people at the show, sharing the latest designs for the new Chase Farm Hospital and answering questions.

Trust staff also explained the benefits of signing up to become a member, which is free and brings a number of benefits such as access to NHS staff discounts and invitations to events.

Fiona Jackson, Chase Farm Hospital director, who attended the event, said: “It’s really important to us that we keep the community informed and engaged when it comes to the new hospital, so I was delighted that we were able to speak to so many people.

“People we spoke to were generally very positive about the plans, and we are committed to ongoing dialogue with the local community to ensure we listen to what people have to say.”

More information about the redevelopment can be found at www.royalfree.nhs.uk/chasefarm.

Find out more about becoming a member of the trust.