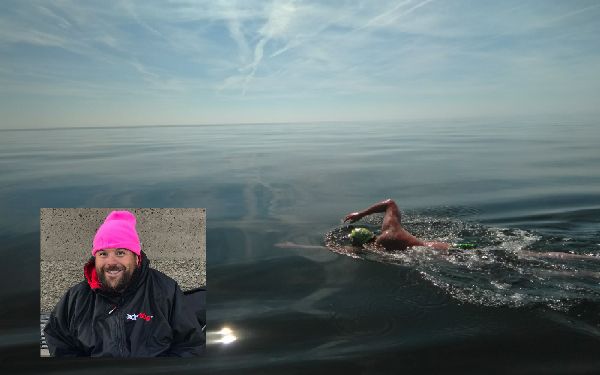 A Royal Free London consultant has successfully completed one of the toughest long distance swims in the world.

Nick Murch, 39, clinical lead for acute medicine at the Royal Free Hospital (RFH), is the first person this year to finish the gruelling North Channel route between Ireland and Scotland.

Dr Murch is no stranger to long distance swimming having already conquered the Channel and Lake Geneva solo in 2016. But he admitted that the North Channel route had been a massive undertaking due to the low temperatures, strong tides and wildlife.

Dr Murch, who has worked at the RFH for seven years, said: “It’s the same distance as the Channel but it’s a lot, lot colder – just 10 to12 degrees – and is recognised as one of the hardest swims in the world.

“You also have to watch out for the jellyfish. I was stung a couple of times by the Lion’s Mane which can pose a real threat. If you get stung too many times you can go into shock. It felt like a burning numbness and it’s how I imagine a stroke would feel.”

Getting ready for the perishing temperatures was a question of ‘cold weather acclimatisation’. That meant trips to Parliament Hill Lido three to four times a week for long training sessions.

“The fact is that long distance swimming is 80% a mental battle,” says Dr Murch, who is only the 53rd person to ever complete the swim. “You think about your breathing and it’s a very meditative state of mind that you enter.”

Not content with his marathon in the North Channel, Dr Murch went on to complete a Lake Geneva relay, with three other people, which took the record for the fastest crossing time.

As well as his acute lead role Dr Murch heads up the hospital’s simulation and technology enhanced academic training hub (STEALTH). He helps to run simulations on wards to ensure staff are prepared for different scenarios and says he sees the similarities in his role to what he faces in the water.

“It’s very much about keeping calm, focused and following a plan.”

Dr Murch is already eyeing up new challenges, including the Catalina Channel and the Straits of Gibraltar.