An episode of BBC2’s Horizon, which was partly filmed at the Royal Free Hospital, aimed to discover whether our drinking patterns can affect our health. 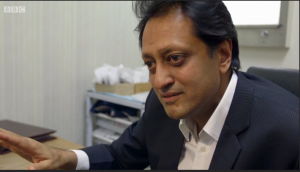 Identical twins Chris and Xand Van Tulleken took part in an experiment which looked at whether drinking binges are worse than drinking a relatively small amount every day.

After each completed a tee-total month, Chris and Xand both came to the Royal Free Hospital where liver specialist Dr Gautam Mehta gave them a series of tests, including a liver scan and blood tests. The twins then embarked on a month of drinking; both of them would drink exactly the same amount of alcohol over the course of four weeks, however, while Chris drank three units a day, Xand saved all his 21 units for the week for drinking binges on four consecutive Saturdays. When the month was up Chris and Xand returned to the Royal Free Hospital where the tests were repeated. Their blood was also tested at various points during the month. The results were analysed by Gautam and Rajiv Jalan, professor of hepatology, who said he was “flabbergasted” by the outcome of the experiment.

The results showed that both Chris and Xand had similar increases in liver stiffness, an indicator of liver inflammation. The tests also showed that the twins had similarly raised levels of cytokines (chemicals released into the blood when inflammation or infection has occurred) after a month of drinking.

Chris and Xand’s endotoxin levels were also measured before, during and after their month of drinking, and this is where their results differed. Endotoxins are chemicals which indicate the presence of bacteria. Xand, who had been binge drinking for the past month, had much higher levels of endotoxins in his blood than Chris, who had been drinking a smaller amount of alcohol every day. According to Rajiv this was because during a drinking binge, the bacteria from the gut leaks into the blood stream.

“When you drink large amounts of alcohol it produces a deleterious effect on the gut,” he said. “There is lots of bacteria leaking into the blood and collecting around the body.”

The tests also showed that the level of endotoxins in Xand’s blood was much higher than normal before he had even started on his fourth alcohol binge.

“This shows that six days are not enough to recover from a binge and that with that level of binging, it takes a month or two to recover,” said Rajiv.

“It shows that binging is significantly worse than drinking sensibly. But it is very clear from the data that 21 units of alcohol a week is not safe for either of you. Because these tests are changing to levels that you see in cirrhotic patients (patients with a damaged liver) – this is after just a month of drinking what is called sensible limits.  I am completely flabbergasted because this is completely beyond my expectations. Whether 14 units would be safe, I cannot tell; whether 10 units would be safe, I cannot tell. But, in the future we will have to reset the sensible drinking limits to perhaps a little bit lower.”