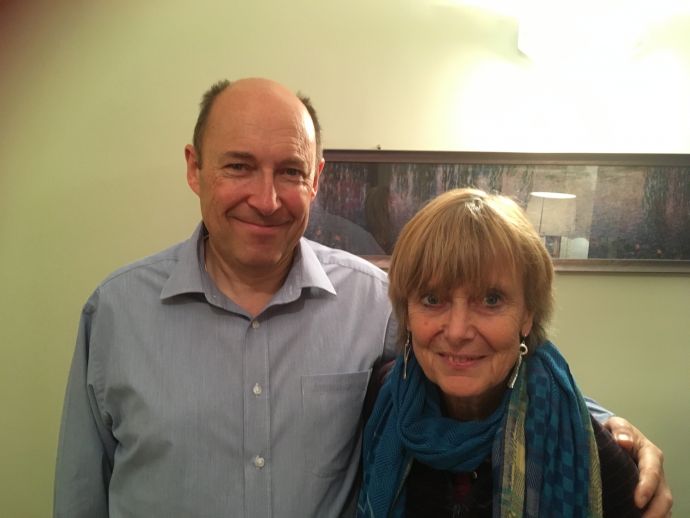 A Royal Free London physiotherapist has been hailed a hero after her quick-thinking actions helped saved the life of keen squash player Julian Morgan.

Wendy Levin, a community-based children’s physiotherapist, rushed to the aid of the 63-year-old when she realised he was having a heart attack.

She had just finished a game of squash at her local club in Crouch End, when Wendy became aware that Julian was in trouble.

Shocked staff and club members watched as she immediately started cardiopulmonary resuscitation (CPR) in an attempt to revive him and maintain an oxygen supply to his brain.

Wendy, with the help of a club first aider, then used the on-site defibrilllator to give electric shock treatment in a bid to restart Julian’s heart before London Ambulance Service paramedics arrived 15 minutes later.

After working to stabilise him for an hour, paramedics transferred Julian first to the Whittington Hospital and then to the specialist Barts Heart Centre, part of Barts Health NHS Trust.

Wendy, who has worked at the trust for more than 17 years, said: “I was sitting at the bar after a Friday night practice game when one of the bar staff said someone on the squash courts was having a seizure.

“I work with children with severe learning disabilities and I am very familiar with seizures, so I went to see if I could help.  As soon as I saw Julian I knew he was having a heart attack not a seizure, he was going purple and did not have a pulse.”

Wendy said that her medical training took over and she started CPR immediately.  “All I could think was that ‘I have got to get this guy going and get a heartbeat’,” she explained.
Julian, who is now well on the road to recovery, said that he feels ‘deeply, deeply grateful’ to Wendy for saving his life.  “She is definitely a hero,” he said.

“I’m 63 years old with four adult children in their 20s and 30s and I’m just so very grateful to be there to accompany them through the next changes in their lives. Wendy’s swift intervention has made an immense difference not only to me but to my family as well.

“As a result of her training she had the confidence to get stuck in at the critical time and saved my life."

Wendy added: “I think it’s so important for NHS staff to be trained up and know their CPR thoroughly, you never know when you are going to need it.

“It would also be great if as many members of the public as possible also had this training so everyone could help out in an emergency and be able to help save someone’s life.”