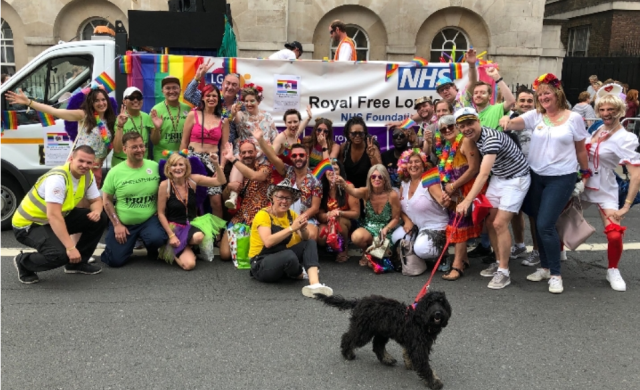 More than 60 staff from the Royal Free London headed to central London to join the Pride parade on Saturday and to east London to support Black Pride on Sunday.

On Saturday, doctors and nurses were joined by staff across the hospital and were cheered on by crowds chanting “NHS” as they paraded on a float, funded by the Royal Free Charity.

Senita Rani Robinson, co-chair of the LGBT+ and friends forum, said: “The Royal Free London presence gets bigger, brighter and better each year and it’s thanks to everyone’s positivity and enthusiasm. This year we had two rainbow families and one rainbow puppy for the first time! Images of our staff appeared in the national press and we even made it on to ITV!”

It was also the Royal Free London’s first year as an organisation at Black Pride on Sunday in Haggerston Park in east London.

Stephen Downer, co-chair of the LGBT+ and friends forum said: “We were here with the Royal Free London’s BAME staff network, including co-chair Annette Heslop. MPs Dawn Butler and Diane Abbott all met us at the stand, as did Phyll Opoku-Gyimah, the co-founder of UK Black Pride.”

Senita added: “It’s a brilliant party but it also helps us to highlight awareness of the work we do right through the year. We host LGBT+ and equality events for staff and patients throughout the year and are proud of our achievements.”