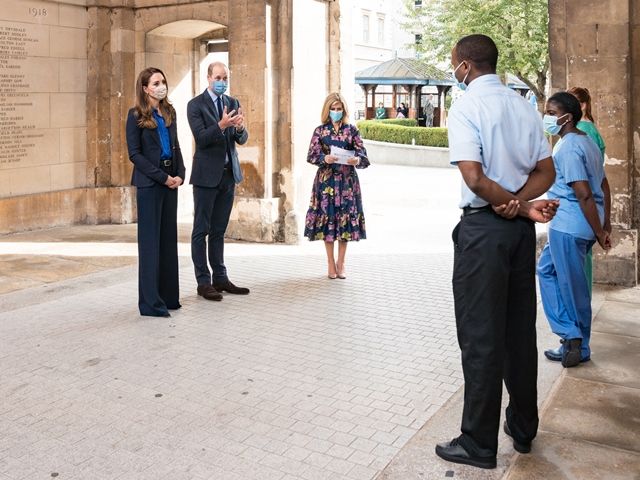 Three members of staff from the Royal Free London (RFL) said they were honoured to accept a Pride of Britain award from the Duke and Duchess of Cambridge on behalf of heroic NHS colleagues from across the entire nation.

Helder Lopes Landim, a porter at Barnet Hospital, Martha Sarpong, an operating department practitioner at Chase Farm Hospital, and Charlotte Greenfield, a critical care physiotherapist at the Royal Free Hospital, were presented with the Special Recognition award at St Bartholomew’s Hospital, along with three members of staff from Barts Health.

The event was filmed for the Pride of Britain awards ceremony, which will be broadcast on ITV on Sunday, 1 November. Good Morning Britain presenter Kate Garraway, whose husband Derek Draper remains in hospital after contracting COVID-19 in March, was on hand to help present the award.

William told the NHS workers: " We cannot thank you enough. On behalf of a grateful nation, it is a tremendous honour for Catherine and I to present this Special Recognition award to the army of dedicated NHS staff."

Helder, Martha and Charlotte all got the chance to speak to the royal couple about their experiences during the first COVID-19 surge.

Helder, who has worked at Barnet Hospital for five years, said: “Will asked me what it had been like and I said it had been very tough but that we had worked together as a team and were now prepared for any second wave.”

Martha, who worked at Barnet Hospital during the first surge, added: “Kate wanted to know how it had felt receiving the support of the public towards the NHS. I told them how humbled it had made me feel and how the support of my neighbours had meant so much to me and how proud I was to tell people I worked for the NHS.”

Charlotte talked about the vital work she and her fellow therapists did in giving patients, many of whom had been on ventilators for long periods of time, the support they needed to breathe, eat and walk again. She also explained how she and a colleague had helped boost morale among those in ICU by compiling regular team emails containing positive updates about patients and staff.

She told the Duke and Duchess: “It really lifted people’s spirits to know that so many of their patients had survived and were now thriving and leaving hospital.”

You can read more in the Daily Mirror today.

The Daily Mirror Pride of Britain Awards, in partnership with TSB, will be broadcast this Sunday on ITV at 9pm.