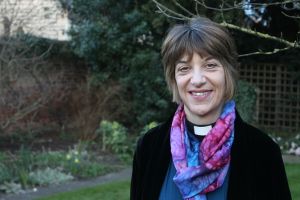 A former speech and language therapist (SALT) at the Royal Free Hospital is set to become the most senior female bishop in the Church of England (CofE) later this month.

On 22 July the Venerable Rachel Treweek, Archdeacon of Hackney, will be consecrated as the Bishop of Gloucester, taking over from the Right Reverend Michael Perham who retired in November.

Two women bishops have already been ordained since the CofE voted to change its legislation last year, but Rachel Treweek will be the first to run her own diocese and will rank one below an archbishop.

Rachel was officially confirmed as the Bishop of Gloucester in a special legal ceremony on 15 June at St Mary le Bow in London. Before training for the ministry from 1991, she worked as a speech and language therapist at the Royal Free Hospital for six years. She was ordained in 1994 from where she went on to serve as a curate at St George and All Saints Church in Tufnell Park and as vicar of St James the Less Church in Bethnal Green.

He said: “Rachel has been an incredibly popular and dedicated priest in London serving in many different parts of the diocese. As the Archdeacon of Hackney she was an incredibly supportive colleague and will, I have no doubt, go on to serve the people of Gloucester with the same passion and commitment to building up communities and forging good relationships.”

On her appointment Archdeacon Treweek said: “It is an immense joy and privilege to be appointed as the Bishop of Gloucester. I am surprised and, I have to admit, even a little daunted by the prospect, but my overwhelming feeling is one of excitement to be coming to join with others in sharing the love of Jesus Christ with the people of this diocese.”

Her consecration service will take place at Canterbury Cathedral on 22 July.