A runner whose heart stopped as he was taking part in a 10km run in aid of the British Heart Foundation has been given a new cardiac device by doctors at the Royal Free Hospital. 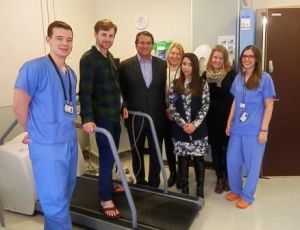 Charlie Grocott, 27, from Tooting, was taking part in the run in Regents Park in March when he began to feel light-headed. Due to an undiagnosed heart condition he suffered a cardiac arrest and collapsed. Luckily, a fellow runner came to his aid and spent two minutes giving him CPR until paramedics arrived.

“I didn’t know who had helped me until the British Heart Foundation put us in touch some days later,” said Charlie. “I came to while I was in the ambulance, the paramedics had taken over. It was very scary as I had no idea where I was or what was going on. Because I had a lack of oxygen going to my brain I was very confused.”

Victoria Houston, a physiotherapist, was running the 10K as part of her training for the London Marathon. She said that it was thanks to her medical training that she was able to help Charlie.

“When I saw Charlie on the floor there were a couple of other runners with him, but when I got there, because of my medical background, I took control. I knew that he wasn’t breathing so then I started trying to resuscitate him. All physios have to be trained in CPR although I never been in a position where I had needed to use it before.”

While Victoria, 30, was administering CPR a paramedic at the race was called over and used a defibrillator to start Charlie’s heart again.

Victoria added: “It’s part of my work so I just think anybody with my training would have done it. I am just so happy that he is alive and I was able to help him.” 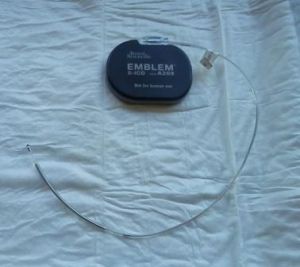 Once Charlie was stable he was taken to the Royal Free Hospital and he has now been fitted with a new type of defibrillator, called a subcutaneous implantable cardioverter defibrillator (S-ICD), in order to treat his heart condition.

The S-ICD is implanted under the skin but outside the ribcage. Usually defibrillators would be fitted inside the ribcage, with leads passing through the veins and into the wall of the heart itself.

The traditional defibrillator is often a life-saving treatment but in rare cases vascular, complications can arise such as a collapsed lung, blood leaking into the chest cavity or blood leaking in the sac around the heart, as well as infection of the leads within the heart. In addition over time the leads can fail and this is a particular problem with younger more active patients, like Charlie.

Dr Raj Khiani, who has been treating Charlie at the Royal Free Hospital, said: “All the tests we have given Charlie have been clear and although we are still awaiting the results of further tests, so far we don’t have a clear explanation as to the cause of his cardiac arrest. Charlie has idiopathic ventricular fibrillation (VF), which means that the cause of his VF, which is a dangerously fast heart rhythm, remains unexplained despite all of our tests.

“This new type of defibrillator is designed to treat the VF, if it occurs again in Charlie. He is the first patient at the Royal Free Hospital to be given an S-ICD and we are one of only a few hospitals in the UK that can provide patients with this device, so we are really pleased we were able to offer it to Charlie.”

After having the device fitted last week, Charlie was discharged the following day and is now recuperating at home. Although he will need to take things easy for a few weeks, he should be able to return to work and gentle exercise in time.

Charlie added: “It might take a bit of getting used to as I can feel it is there under my arm, but I know that in the long term it will be much better than the other device. I will need to have this for the rest of my life and there are far fewer complications attached to this one than a traditional defibrillator. It is a relief to know that I have this, so I know the same thing won’t happen again.”