A total of 44 runners from the Royal Free London, including the dementia team, were joined by Caroline Clarke, the trust’s chief finance officer, in donning Santa Clause costumes for the London Santa Run on 4 December. 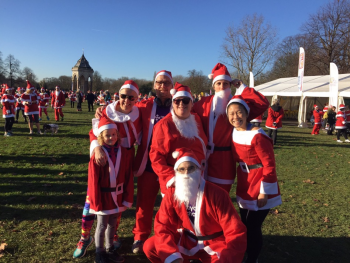 Caroline, who ran with Danielle Wilde, dementia lead at the trust, completed the 5K race at Victoria Park in 40 minutes on behalf of the Royal Free Charity and raised a combined £1,655 for the dementia service at the Royal Free London.

Caroline said: “It was hard as I have not been running for about two years, but I really enjoyed it. I ran with the dementia team because they do such a good job for our patients and I wish we could give them more funding - that is why charity events like these are so important. I’ve never seen so many Santa’s in one place, and trying to find people was impossible, but it was great fun.

“My six year- old daughter, Esmee ran with me for the 2k race, so I thought if she can do it then so can I! I’ve been hurting all over since the run, but it was definitely worth it and I am going to start running again now.”