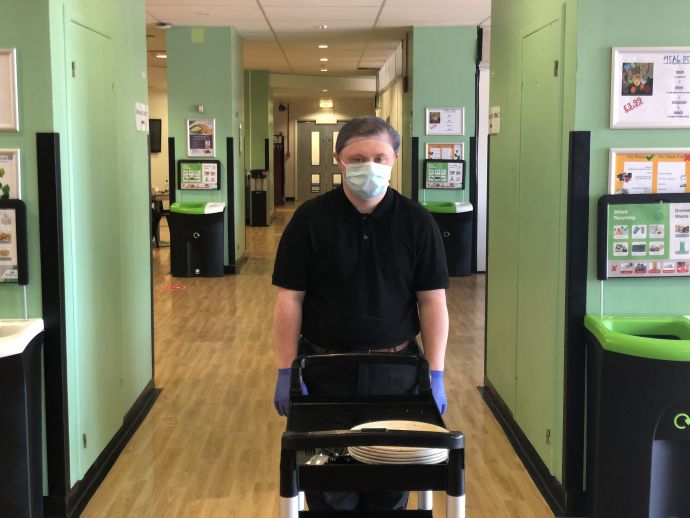 If you’re in the restaurant at the Royal Free Hospital then why not say hello to Harry - one of our newest members of staff.

Harry Stevens, 25, from Highbury and Islington, is on an apprenticeship scheme at the trust and is being supported by Unity Works, a charity which helps people with learning disabilities to gain skills, achieve qualifications and secure jobs, so they can reach their full potential.

That’s why for the next few months you’ll probably spot Harry alongside Stephen Hayes from Unity Works. Steven is Harry’s support worker and as well as helping settle Harry into his new role as a kitchen porter role he is also helping him negotiate his new route to work.

Stephen said: “Before coming here Harry worked in a café helping bake cakes but that placement came to an end after two years and now he’s facing a new challenge at the Royal Free Hospital helping to take care of staff.

“At Unity Works we’re so proud of Harry getting this job and we think it will really encourage our other clients who are also looking for work, at what isn’t an easy time for anyone seeking employment. In addition we’re all having to get used to new ways of working, and for Harry and me that means wearing a mask.

Harry said: “I’m pleased to be here and I’m doing everything from wiping tables and collecting trays to restocking drinks in the fridges. Another part of my job is to ask people to respect the one way system. I know it’s a bit annoying but please let me help keep you safe.

“My team are nice and I’m enjoying meeting everyone – so do say hello to me if you see me. I admit I’m looking forward to getting paid and treating my mum and sister to a takeaway!”

Larry Rosenthal, catering manager at the Royal Free Hospital, said: “I’m so glad we were able to offer the job to Harry and I know staff will make him feel part of the Royal Free family.”