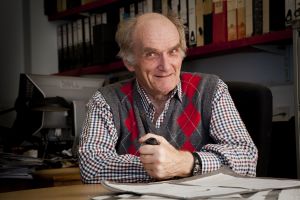 University College London professor and pseudoscience debunker Professor David Colquhoun will be sharing his thoughts on the misunderstanding of statistics at a talk at the Royal Free campus of the UCL medical school on Thursday.

As well as being a world-renowned pharmacologist, Professor Colquhoun also writes the popular DC’s Improbable Science blog, which sees him attack pseudoscience and scientific fraud, with the majority of his criticism devoted to alternative medicine.

In Thursday’s lecture ‘the most important “transferable skill” is mathematics’ he will talk about the misunderstanding of statistics and explain why the term “statistical significance” has resulted in many false discoveries.

The event forms part of the UCL division of medicine’s 'science in action' programme, a series of lectures on the practical applications of medical science by some of the world’s leading researchers.
Members of the public are welcome to attend.