A scientist at the Royal Free Hospital has been awarded a prestigious European prize for her research into the causes of type 1 diabetes. 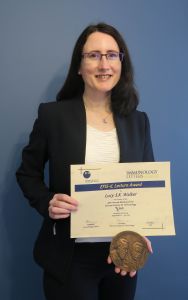 Lucy Walker, who is professor of immune regulation at the UCL Institute of Immunity and Transplantation, has received the European Federation of Immunological Societies (EFIS) Lecture Award at the 2016 congress of the German Society for Immunology.

Professor Walker’s work focuses on understanding how immune responses are initiated and regulated and how defects in these processes can cause autoimmune diseases. In particular, her team aims to understand how the immune system attacks and destroys the insulin-producing cells in the pancreas – a process which leads to type 1 diabetes.

In 2014 Professor Walker and her team discovered that a particular kind of immune cell, a follicular helper T cell, is responsible for triggering an immune response in the body which leads to the condition. Her continued work to understand the causes of type 1 diabetes means scientists can move closer to developing an effective treatment for the condition.

The award presented to Professor Walker is for an outstanding European scientist invited by other EFIS member societies to speak at their national meeting.  Together with a bronze medal and a diploma, she received an honorarium of 700 Euros.

Professor Walker said: “It is a great honour to be selected for this prize and to have the opportunity to participate in the German national immunology meeting in Hamburg.

“International collaboration is critical for our research and I feel very proud to have received this award from my European colleagues."