A group of researchers at the Royal Free Hospital are the first to show that scaffolds created from donor livers can be used to create new organs for use in transplantation.

The team, led by Dr Giuseppe Mazza and Professor Massimo Pinzani and based at the UCL Institute for Liver and Digestive Health at the Royal Free, are working on a way of creating new livers for patients whose own livers have stopped working properly. 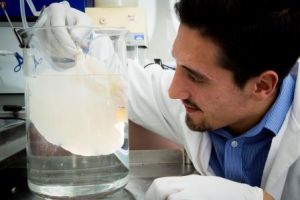 The technique involves using livers that cannot be transplanted, because they are too fatty, cancerous, or were not matched in time, and stripping them of cells, leaving only the scaffold.

Their research, published in Nature Scientific Report, has shown that the scaffolds can be successfully repopulated with human liver cells which continue to function. The long-term aim is to be able to repopulate the scaffolds with stem cells taken from a patient who needs a new liver or with cells which have been modified so they don’t provoke an immune response. This liver could be transplanted into the patient, and because it is created from their own cells or with the modified cells, the immune system would not reject the organ and the patient would not need to take immune suppressing medication. At present, transplant patients need to take these immune suppressing drugs for the rest of their lives. It also means patients who need a transplant would not have to wait on the transplant list until a suitable donor organ becomes available as a new liver can be made from their own cells.

The team is also using the livers to create cubes which behave more like the real thing when used in research. Professor Pinzani said: “Over the past few decades research into new drugs for liver disease has been painfully slow, because liver cells tested on plastic Petri dishes behave very differently to the way the cells behave in real life. So drugs which appear effective in plastic, are not effective once tested in humans.”

But the liver cubes created by Giuseppe and Walid behave in the same way that liver cells do in humans – and they can be used to test the latest drugs, which means the research can progress much more quickly. 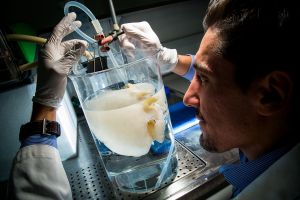 The research team is available 24 hours a day to collect livers from across the UK. They work with NHS Blood and Transplant, the organisation which arranges for transplant organs to be sent to suitable recipients, who will let them know if a liver becomes available. They would only use livers which cannot be used in transplantation.

With help from the organisation Tissue Access for Patient Benefit (TAPB), they organised their own transport to bring the livers – around 100 per year - to the Royal Free Hospital. The livers are cut in two – half is used for the scaffold research and the other half to create the liver cubes.

Giuseppe said: “This research is the next step towards being able to create new organs from stem cells. This new technology will, in the future, change the lives of millions of patients who are currently waiting, sometimes years, for a suitable donor organ to become available. It’s really exciting to be working in this area of research.”

The team has received funding from the Royal Free Charity and from the UCL Biomedical Research Centre, and Harvard Apparatus donated a bioreactor, equipment which is used to decellularise and recellularise the liver.

Walid Al-Akkad, a researcher who works on the project, added: “The liver cubes will go a long way to improving the efficiency of research into liver disease – very little progress has previously been made in this area. Other research centres will be using the liver cubes we have developed because tests carried out on them produce much more realistic results than tests carried out on liver cells in plastic.  This means new drugs will be produced more quickly.”

Giuseppe said: “In addition, because the liver cubes act more like real livers, less animal-testing is needed during the drug development process.”

Initially the team cut the liver cubes, which are 0.5cm squared, by hand, which was a slow process – it took them 10 hours to create 600 cubes. But last year they contacted a company in Germany which makes machines for butchers, and had a bespoke machine made which allows them to produce 1,000 cubes per hour.

Professor Pinzani added: “This team of young scientists is carrying out some incredibly exciting work at the moment, which we hope will mean a huge improvement in the treatments we are able to offer liver patients in the future. There are different  types of liver disease affecting at least 2 million people in the UK – and it is on the increase, so this work is going to be hugely important in the coming years.”