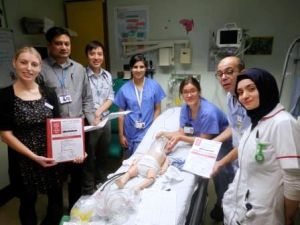 Over the past four months the A&E paediatric team and the sepsis improvement group at the Royal Free Hospital have worked together to launch the sepsis six pathway for children.

Sepsis is a life-threatening, overwhelming response to an infection. The sepsis six pathway, a set of interventions which can be delivered by any healthcare professional working as part of a team, can demonstrate a reduction in mortality from 60% to 30% when the pathway is implemented within the first hour.

Last week saw the official launch of the pathway in the emergency department at the Royal Free Hospital.

In preparation for the launch, the paediatric and A&E teams trialled the pathway on a model, successfully resuscitating it using the sepsis six pathway: oxygen, fluid challenges, blood cultures, intravenous antibiotics, blood gas and a fluid balance chart.

Nurses demonstrated the pathway and escalated the issue to a consultant from the patient at risk and resuscitation team (PARRT), as they would in real life. The model baby showed signs of improvement as the nurses went through the process.

So far the paediatrics department in A&E has achieved a 100% compliance rate in the first hour of identifying the infection using the sepsis six pathway in the past four months. There has also been extensive sepsis improvement in the adult and maternity wards, and over the past 12 months the trust has achieved and sustained a 90% compliance rate with all sepsis six interventions within a one hour period across eight pilot areas. These pilot ward areas include A&E, 8 North, 8 East, 10 South, 10 East, 7West, the labour ward and now paediatric A&E.

Dr Neil Thompson, consultant for paediatrics and emergency medicine, said: “There is good evidence that prompt and appropriate resuscitation saves lives. Although significant sepsis in children is uncommon, there have been several high profile cases in the UK over the past few years and the effects can be devastating. We are developing an exciting and multidisciplinary approach to paediatric sepsis, improving patient safety and helping deliver world class care.”