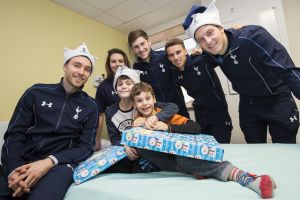 Christian Eriksen, Ben Davies, Tom Carroll, Kevin Wimmer and Leanne Mabey from the ladies’ team took time to take pictures with and talk to the patients and their parents, as they walked around Galaxy and Starlight wards dropping off gifts for the children.

Nine-year-old Nadav Gordon and his brother Rafi, seven, said they were thrilled the Spurs players had visited and said the presents they received were great.

Alonso Rama, nine, was delighted to receive his first Christmas present of the year but said he would keep it under his tree until Christmas day. Alonso asked the players to sign a Spurs flag. “I want to take this in to school, to prove to all my friends that I have met the players,” he said.

Sara Khafife, 13, said the visit had brightened her day, and said it was a "really cool surprise" to meet the players.

The footballers also chatted to staff and had pictures taken with those working on Galaxy and Starlight wards.

Defender Kevin Wimmer said: "It was great to meet the children at Barnet Hospital. I think they all liked their presents and it was nice for us as players to visit the ward and help put a smile on some of the young children's faces at Christmas. It must be hard to be in hospital at this time of year, especially children as young as we met today. They are all incredibly brave."

See a photo gallery of the visit.

Image: The five players with Nadav and Rafi Gordon.