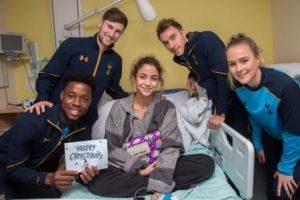 Kalli Bargiela, 16, said she wanted to save her present for Christmas and added: “It was a wonderful experience – a lovely Christmas surprise. Their visit has definitely lifted my spirits.”

Victoria Tointon, also 16, received headphones, a watch and some other Spurs-themed merchandise. “It was really exciting to meet them,” she said. “It was nice to get all these presents – I am a big fan!”

During the visit the players also found time to phone patient Alonso Rama, who they met when Ben and Christian visited the ward last Christmas. Alonso is currently being treated in a different hospital, but was keen to speak to the players again this year – so the staff arranged for them to contact him. 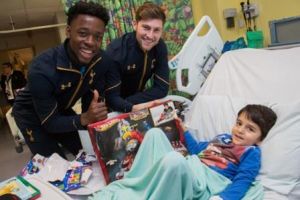 On Starlight, the neonatal ward, David Morrissey, whose twins Daniel and Orlaith were born five days ago, is a huge fan and has a season ticket at Spurs. The players also spoke to David’s older son Ben, 7, on the phone.

“Ben is a massive fan and goes to bed in his Spurs kit,” said David. “He will be over the moon that he got to speak to the players on the phone. It will have made his Christmas!”