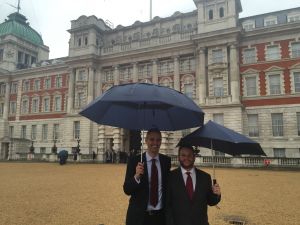 Two clinicians who successfully treated three Ebola patients at the Royal Free Hospital have said they feel "honoured" after joining a homecoming parade for NHS, armed forces and government staff who took part in the global fight against the disease.

Prime Minister David Cameron was joined by dozens of MPs, including Labour leader Jeremy Corbyn, in applauding Dr Stephen Mepham, consultant in infectious diseases and Ollie Carpenter, clinical practice educator, as they marched alongside fellow health workers and other personnel into the Houses of Parliament.

Mr Cameron said: "I just want to say a huge thank you for what you have done. Some of you were sent to Sierra Leone to face a silent killer. Then it was in crisis, today it is close to being Ebola free."

Also there to honour personnel were Jeremy Hunt, Secretary of State for Health and Justine Greening, International Development Secretary. 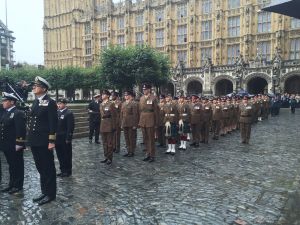 Paying tribute to the work of NHS staff both in Africa and in the UK, Mr Hunt said: "The way the NHS responded, to me, was the very best of what the NHS stands for across the world. We had thousands of doctors and nurses all volunteering to put themselves in harm’s way because they could see what an awful catastrophe was unfolding before humanity.

"I have never felt more proud to be British as when I saw this collective national effort to fight this horrible disease."

Speaking after the event, Mr Carpenter said: "I enjoyed it very much. It was quite an honour to come here and have all these MPs applauding you.

"Treating Ebola patients was such an amazing thing to do and to get this kind of recognition is fantastic."

Dr Mepham added: "I couldn't quite imagine coming in to the NHS that I would have a day like this with MPs, ministers and the Prime Minister.

“It's a fantastic recognition of the work of the MoD and NHS workers in West Africa."

Picture 2: The parade finished outside the Palace of Westminster.