Staff at the Royal Free London celebrated their achievements from the past year at the Oscars awards last night – with help from guest host and former EastEnders actress Tracy Ann Oberman.

More than 250 members of staff attended the event, which was made possible by the Royal Free Charity, and 20 awards were handed to staff who had made a significant contribution to patient care in 2015.

Tracy Ann, who played Chrissie Watts in EastEnders and has starred in comedies Friday Night Dinner and Toast of London, announced all the award-winners and said she was “honoured to help her wonderful local trust.” 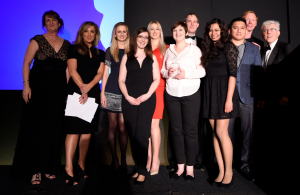 Among the winners from the nine different categories were the viral hepatitis team, who won team of the year after achieving the highest treatment activity nationally for their type of patients, and Dillon O’Flynn, ward clerk on Larch Ward, who won the unsung hero award for her work in caring for elderly patients.

There were two winners for the clinician of the year award – junior sister in general surgery Regina Irwin, and Dr Vaseem Hakeem, a consultant paediatrician.

Last night a range of staff from across the trust attended the event, including doctors, nurses, porters, volunteers and support staff.

David Sloman, the chief executive of the Royal Free London, said: “Tonight is about recognising your remarkable achievements throughout the past year and the excellent work that has been done to improve the lives of our patients.”

The chairman of the trust, Dominic Dodd added: “We’re here to celebrate the ways in which you as individuals and as teams strive to improve patient care. We are going to celebrate how you’ve put our patients at the centre of everything you do and continually ask what you can do to improve their care.”

See a gallery of images from the night.

The full list of award-winners from last night is:

The team of the year award

The clinician of the year award

The quality, research and/or innovation award

The outstanding contribution to education award

The volunteer of the year award

The equality, diversity and inclusion award

Image: The award-winners from the Oscars