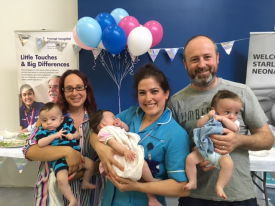 The Starlight NICU “Little Stars” programme is a five week closed group offered to all parents after discharge from the NICU. The group aims to provide peer support to parents following a traumatic hospital admission. Each session begins with infant massage, developmental advice, anticipatory guidance and includes an education session from a variety of health care professionals. At the end of several of these groups parents voiced that they would like to meet up and asked if it would be possible to have some sort of reunion, and so the Starlight NICU summer party was born.

Everyone who had attended the “Little Stars” group or who’d had access to the community nursing team over the last year was invited, and over 50 families attended the event.

Neonatal occupational therapist Emily Hills said: “A massive thank you must be given to our amazing Starlight team who all pitched in to make the event a really happy and memorable experience for our families. The party was a great success and a fantastic opportunity to catch up. It provided our Starlight team with a chance to say thank you to each family for allowing us to have the best job in the world.”