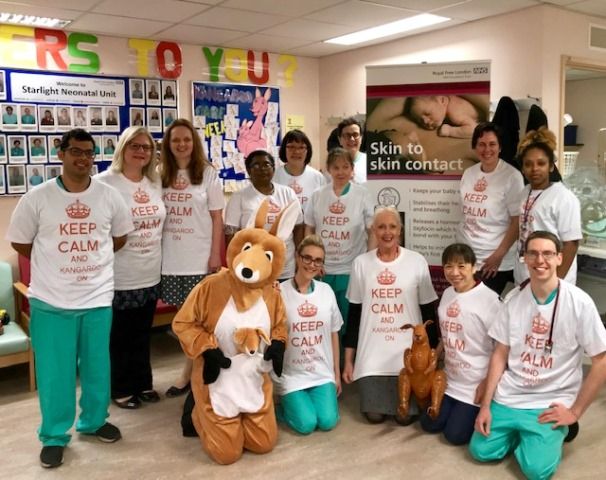 The Starlight neonatal team at Barnet Hospital took part in an international challenge to encourage as many new mums as possible to give their babies skin-to-skin care.

The Kangaroo Mother Care Challenge saw families encouraged to use the ‘kangaroo method’ of newborn care for as long as possible over the first two weeks of May. The team then celebrated Kangaroo Care Awareness Day on 15 May.

Kangaroo care, first practised in Colombia in 1978, is the practice of holding babies skin-to-skin after birth, named after the way in which kangaroos carry their children. Recommended as best practice in neonatal care by UNICEF and the World Health Organisation, kangaroo care comforts and calms babies in the stressful period after birth, regulating their body temperature and helping to insulate them from the stimuli of the outside world.

For the Starlight team, it forms a key part of an approach that prioritises family integrated care – the practice of keeping families as close as possible after birth – across the neonatal unit.

Shanthi Shanmugalingam, neonatal consultant at Barnet Hospital, said: “We know that kangaroo care has many beneficial effects for babies (growth, physiological stability) as well as parents (bonding, improved breastfeeding), which is so important for our premature and sick term babies".

Celebrated since 2011, International Kangaroo Care Awareness Day is the product of a global effort to spread knowledge of the kangaroo method among expectant and new mothers, and in neonatal intensive care units (NICU) worldwide.

The Starlight specialist neonatal unit is the only NICU in the UK to have single rooms allowing for parents and their children to stay together 24 hours a day, with space for up to 30 babies at a time. A 2019 Dutch study found that single-family rooms reduced rates of sepsis by 37% and increased rates of post-discharge breastfeeding by 31% among prematurely born babies and their mothers.