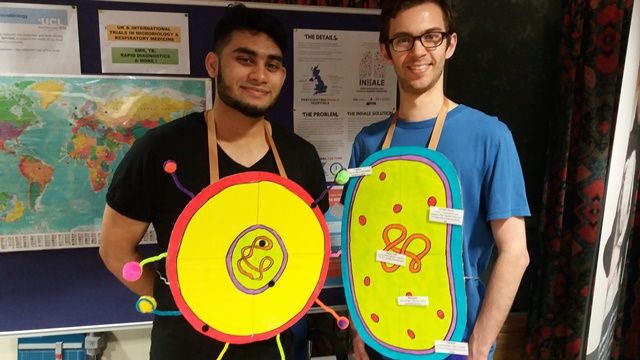 Local sixth-formers joined visitors and staff today at the Royal Free Hospital to find out more about the life-changing research taking place at the trust.

Talks, posters and interactive sessions were part of the open day, aimed at demystifying research and promoting patient and staff involvement.

Derek Stewart, director for patient involvement at Nottingham Biomedical Research Centre, shared his story. He revealed that when he developed cancer of the larynx in 1995 the research that his doctors had done and had access to meant that instead of losing his voice box he was treated by radiotherapy and managed to keep his voice. Now he uses it to support the development of public involvement in research.

Derek said: “Patients tell me that if they are part of research they feel part of the future. The key thing when it comes to designing a study is to listen to your patients and find out right from the start how they can inform and shape your research.

“It might be purely practical feedback like what time is best for them to come to the hospital to take part in the study or you could end up revolutionising an aspect of their care.”

Among the speakers was Professor Peter Butler, consultant plastic surgeon and head of the face transplantation team at the Royal Free London, who treats patients with facial scleroderma, a progressive condition which can leave patients unable to move their mouths from a fixed position with their teeth bared.

He said: “I treat a very brave group of patients. Using lipotransfer of fat from other parts of the body into their face we’ve shown that patients can achieve improved ability to eat and improved speech. Even after just one treatment their mouth function was significantly improved.”

A trial with 62 patients was shown to improve mouth function and also delivered psychological benefits, including patients feeling less anxious because regaining a more normal face meant they were stared at less.

Lorna McGinley, a biology teacher from La Sainte Union Catholic School, said the day was invaluable for the six students who attended. Students were given the opportunity to put on lab coats and perfect their pipette techniques on the microbiology stand.

She said: “It’s been brilliant to have this opportunity to inspire our sixth-form students. It’s been really helpful for them to see how research changes lives and how it could be something that their current studies could put them on the path to.”

(PIC: L-R Naseem Ahmed, masters student and Dewi Owen, research assistant, are based at the centre for clinical microbiology at the Royal Free Hospital. Dressed as a virus (Naseem) and bacterium (Dewi) the duo demonstrate what properties a bacterium has, which enables antibiotics to work, as opposed to a virus, which is immune to antibiotics.)