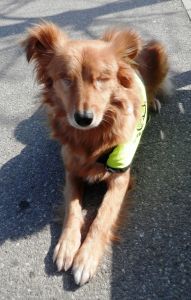 Nym was abandoned on the streets of Romania, had her eyes gouged out and was tortured in a dog pound. But despite such traumatic start in life Nym has overcome the worst and is now a happy, contented dog who brings smiles to others as part of the national Pets As Therapy (PAT) programme.

Sian Porter, specialist maxillofacial and orthodontic nurse at Barnet Hospital, first met Nym in September 2013. Sian is registered with Blind Dog Rescue UK, a charity that provides temporary, safe and loving homes to stray and abandoned blind dogs until they are adopted permanently. She offered Nym a foster home before deciding to keep her.

Sian said: “Everyone who comes into contact with Nym falls in love with her instantly. Though she was treated horrifically by her previous owners, she is still such a trusting, placid dog who I just couldn’t let go once the foster period had ended.

“She has had such a bad start in life and you would think her blindness would slow her down, but it doesn’t at all. It doesn’t affect her ability and she even managed to pass the test to become a PAT dog, offering therapy to vulnerable patients.” 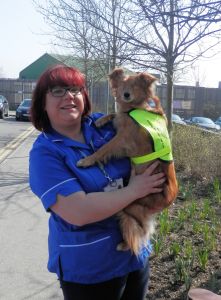 Nym’s therapy dog role began in September 2013 after she was entered into a local novelty dog show, winning the “best rescue dog” category for her story and good nature. This prompted Sian to contact PAT to ask if her canine friend could join the scheme, which provides therapeutic visits to venues such as hospitals, hospices, nursing and care homes.

After a rigorous assessment Nym was accepted and currently visits a children’s residential home on the weekends and a stroke unit at a local hospital during the week.

“Most of the children in the residential home are wheelchair bound and have autism so they can be a little rough,” said Sian. “But Nym takes it in her stride and isn’t troubled by all the stroking and attention. To see the children’s faces and reactions is very emotional.

“Life now centres around our superstar. Although I have three other dogs at home, Nym definitely takes centre stage.”

The superstar lifestyle continues as the brave pooch’s story was recently featured in the national media. She was also invited to this year’s Crufts, while The Kennel Club handed her a special pass in recognition of her PAT work.

Today PAT provides dogs to wards at both the Royal Free Hospital and Chase Farm Hospital, and Sian is currently going through the volunteer recruitment process in the hope that Nym will be the first dog to bring joy to patients at Barnet Hospital. So watch this space.