Hundreds of visitors to the Royal Society’s annual Summer Science Exhibition were given the chance to operate a surgical robot which is used routinely by surgeons at the Royal Free Hospital’s kidney cancer centre. 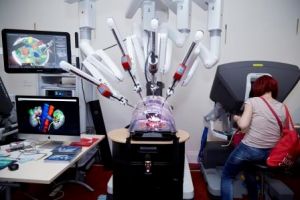 On display at the exhibition earlier this month was a state-of-the-art Da Vinci robot which is used to remove tumours while preserving as much normal kidney tissue as possible.

The Da Vinci robot, which is used by surgeons at the Royal Free to remove kidney tumours, was on display at the Royal society’s annual Summer Science Exhibition earlier in the month.

The exhibit by the team of Royal Free surgeons was one of 22 selected to appear at the prestigious event.

Surgeon Faiz Mumtaz, who led the team, said: “We had long queues – people were waiting half an hour to have a go on the robot. We had lots of young people interested and they all picked it up very quickly. A lot of them were school students interested in becoming surgeons.

“The future of surgery is robotics. At the moment the surgeons are operating the robot and doing everything but the next step is robots with artificial intelligence that will be able to carry out operations themselves.” 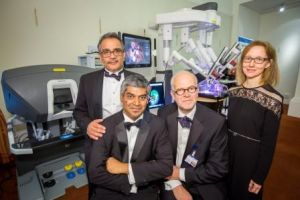 Faiz and his team also exhibited new software which enables them to view a 3D image of the kidney and the tumour before surgery.

Faiz said: “Normally you would have a CT scan, which would create 2D ‘slices’ of the kidney and the surgeon would have to mentally construct a 3D image from those. Now we have these 3D images which let surgeons see the exact relationship between the tumour and all the blood vessels around the kidney. This makes the operation easier for the surgeon and safer for the patient.

“The event was a great success – the intention was really to educate the public about this incredible technology and I think we achieved that.”

Images: Top - The robot being operated by a visitor to the exhibition. Bottom - members of the Royal Free's urology team.