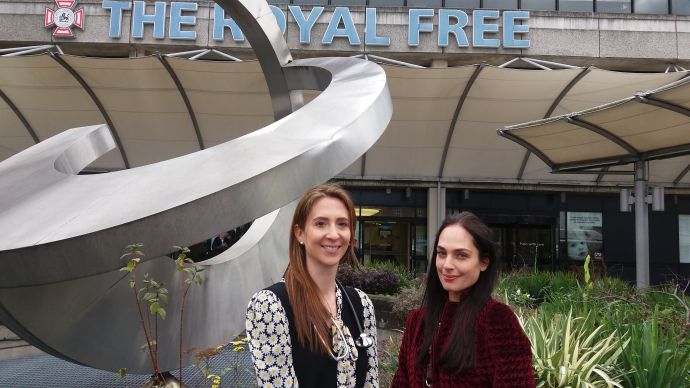 A woman diagnosed with a ‘life-threatening’ kidney condition when she was just 15 months old is now determined to carry on the fundraising work of her parents.

Nancy Payman, 36, from Finchley, spent her childhood in and out of Great Ormond Street Hospital as a child due to a rare kidney condition known as ‘nephrotic syndrome’.

The condition causes the kidneys to leak large amounts of water into the urine. This can lead to a range of problems, including swelling of body tissues and a greater chance of catching infections.

Nancy said: “One morning my mother went to get me from my cot and noticed my face was very puffy. At first the GP thought it was an allergic reaction to decongestant capsules. But as the days went on and my condition worsened, it became clear something else was going on. I became so swollen that my nappies and clothes no longer fitted me.”

Nancy ended up being rushed by ambulance to Great Ormond Street Hospital. Her parents were warned that by the age of five Nancy was likely to be facing kidney failure and would need dialysis and a transplant.

Over the following years Nancy was treated with all kinds of drugs but nothing seemed to help. Finally Nancy’s paediatrician had a hunch and decided to try a chemotherapy drug called Vincristine, originating from the Madagascan periwinkle flower.

“Incredibly that proved the turning point,” said Nancy. “Vincristine became my miracle drug and sustained me in remission.”

Although the drug proved incredible effective for Nancy it did not produce the same results for other patients and was not used in the UK again for the condition.

Nancy’s last admission had been aged 16 and after this she had been referred to the Royal Free Hospital. But it seemed things had resolved themselves and after just one visit to the hospital she got on with her life completely medication-free.

For the next 20 years Nancy just lived her life normally. “When I had my two children a few years ago it crossed my mind that this might affect my body but my pregnancies were both normal. I’d been told it was a condition I might ‘grow out of’ and that’s what I believed had happened.”

Unfortunately that was not the case. Last May, Nancy had a relapse.

“The symptoms were very obvious,” said Nancy. “I’m quite slim but in just a few days I’d gained two stone in weight due to water retention and was feeling bloated and couldn’t do up my jeans.”

So it was back to the Royal Free Hospital.

Nancy was placed under the care of Dr Ruth Pepper, a renal consultant, who by chance she had met recently at her sister-in-law’s engagement party.

Nancy said: “When I’d been introduced to Ruth and found out where she worked I talked about my childhood condition and she was fascinated and said she would go home and Google Vincristine in nephrotic syndrome. Little did we realise I’d be sitting in front of her a few months later.”

Dr Pepper said: “Depending on the cause, as many as half of patients with nephrotic syndrome may develop kidney failure that progresses to end-stage renal disease, which means they may need dialysis or a transplant. In Nancy’s case we listened carefully to what she told us about the drug that had been so successful for her as a child.

“My colleague, Dr Aine Burns, and I knew the drug was unconventional but with the support of our fellow consultants we managed to get permission to use the same drug and the great news is, that after several months of individualised treatment, Nancy is now back in remission having been very unwell last year.”

Nancy said: “Nothing can repay the hospital for the amazing care and support they give me and so many others but I want to give something back as a way of saying thank you.”

Following in the footsteps of her parents who raised thousands of pounds for Great Ormond Street Hospital, Nancy is organising a 15 mile walk round Richmond Park on Saturday 30 September to raise money for kidney research. For more information about her fundraising and to support Nancy go to her just giving page: