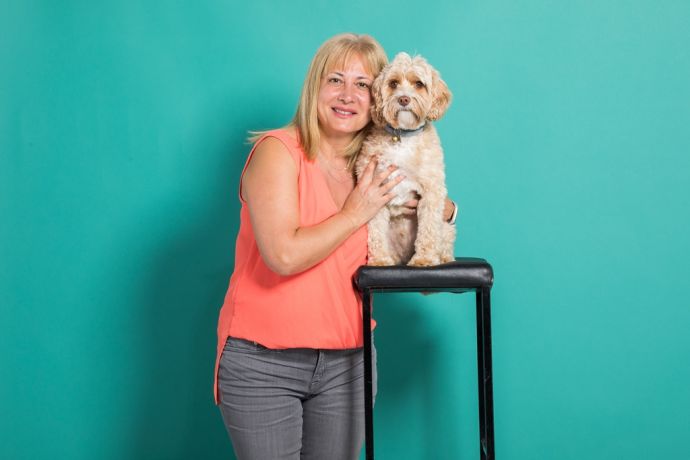 A Royal Free Charity volunteer says she will never forget the Royal Free Hospital ‘heroes’ who worked a miracle to save her life after she contracted COVID-19 (coronavirus).

Shiva Bernheim, from Hampstead, says she ‘owes her life’ to the hospital’s incredible staff . Thanks to them she is now recovering at home after spending 11 days being treated for coronavirus.

But Shiva, who has volunteered twice a week at the hospital with her therapy dog Rolo for the past three years, said: “There were hundreds of people involved. From the consultants, the doctors and the nurses to the cleaners. They are all my heroes. Professor Lamb, James and Will and Michelle. I only remember a few names but I will never forget any of them. The way they laid their lives on the line for me was unbelievable. They were the hands of God in action. As far as I’m concerned I shouldn’t be here – it’s a miracle that I’m alive. A miracle.”

Shiva said her health deteriorated to such a point that she thought she might not recover from the virus.

The 61-year-old charity volunteer said: “I’ve been a regular visitor to the wards with Rolo, doing our best to raise morale but this time I was the patient. I owe my life to the incredible staff who looked after me and did everything in their power to help me pull through. It was touch and go and there were times I didn’t think I would make it.”

Shiva, who suffers from asthma, said she became unwell after she returned from a skiing trip to Switzerland.

She said: “I developed a temperature. It kept going up and down but never went below 38.2 and was going up to 40 degrees. I struggled for a few days at home. My breathing was terrible.”

Shiva’s husband called an ambulance which took her to the Royal Free Hospital.

She said: “I thought I’d be seen and then be home in a couple of hours but instead I was seen by a respiratory consultant who said, ‘she’s got Covid-19, get her a bed’.

“My situation deteriorated – by this point I was up on a ward. All the staff were simply amazing. They were professional, caring and lovely. I could see they were all trying their hardest and fighting for me.”

Shiva said the staff ‘blasted’ her with oxygen and were giving her huge amounts of medication.

“I was being blasted with 40 litres of oxygen 24/7. The staff were tireless despite their own exhaustion. I was on observation every hour which meant they had to put on all the protective equipment each and every time. I was so so close to my lungs collapsing.”

Although after six days she started feeling a little better it wasn’t a quick process. She had to receive yet more treatment as the doctors were concerned she wasn’t recovering from the virus as they’d have hoped.

She said: “I was moved to a different ward and still kept a very close eye on. It wasn’t until I was able to breathe unaided without the help of the oxygen that I knew I’d reached a turning point.”

Shiva said she wanted to share her story in order to pay tribute to the staff who cared for her.

On returning home even Rolo knew something had happened.

“When Rolo normally sees me he goes overboard but when I got home he was subdued and didn’t jump up. He could clearly sense how frail I was. Ever since I’ve been back home he doesn’t leave my side.

“Now I’m in isolation but I can truly say it is the best feeling in the world to be at home and have the luxury of simply being here. I’m doing nothing but it’s heaven.

“I want to say a huge thank you to the staff for what they have done for me and I want to let you all know that when I’m recovered and when this is all over Rolo and I will be back volunteering again for the Royal Free Charity. I can’t wait.”

The trust and the charity are asking the public to lend their support to staff via the Royal Free Charity Covid-19 Emergency Fund. Can you help? Please go here to find out more details of the campaign including how to donate.