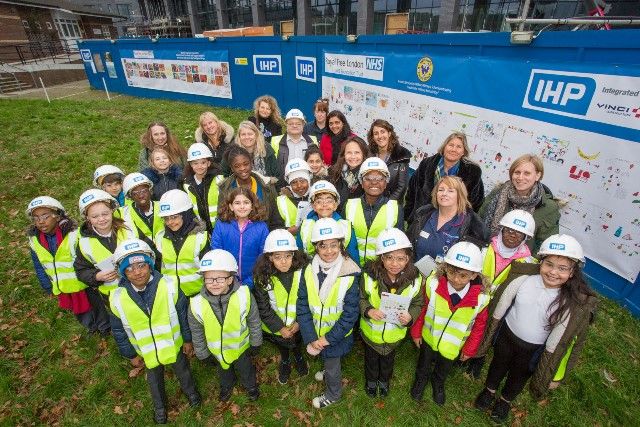 Children from Wilbury Primary School, Enfield, donned hard hats and ‘hi-vis’ jackets for the unveiling of some very special artwork – which they designed.

The artwork has taken pride of place on a banner outside the new Chase Farm Hospital which is due to open in the autumn next year.

The site contractor, IHP, invited the children to draw pictures based on the theme ‘Health: the Wilbury School Way’ to decorate the hoardings while building work at the new hospital is completed.

Year 5 rose to the challenge and produced a colourful selection of pictures promoting good health including advice to exercise more and eat a diet with plenty of fruit and vegetables. The pictures also warn people to cut back on more unhealthy foods such as fizzy drinks and chips.

Teacher Talya Schneider said: “The children have been very excited about seeing their pictures up on the hoarding. It’s brilliant for them to see the result of their hard work and I think it’s made them think about what being healthy is all about.” 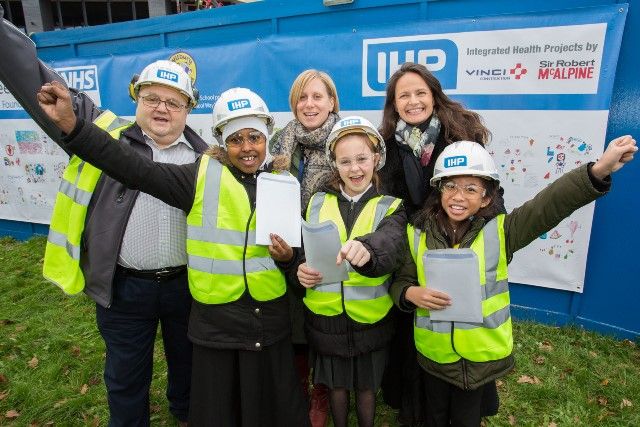 Steve Williams, IHP’s senior construction manager, said he was pleased to see the children looking ‘just like me’ in their hats and fluorescent jackets and praised the high standard of the work.

He said: “I hope lots of people will stop and look at your pictures as they pass by. They definitely brighten up our building work. Well done to all of you.”

Chase Farm Hospital’s chief executive, Natalie Forrest, said: “It’s great to see the children pointing at their handiwork and being involved with our new hospital. They will be the next generation using the hospital and hopefully we can even inspire some of them to work here!”

Also unveiled at the same time was a banner with pieces of artwork from the Enfield Mayor’s Award for Visual Arts in partnership with Barnet and Southgate College, in which 12 primary schools in the borough took part. This competition was open to all budding artists in years 5 and 6 attending any primary school in Enfield and the winners were announced back in April. Some of the children and their parents attended the banner unveiling and posed proudly with their work.