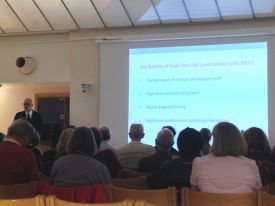 At our medicine for members event on 29 June, consultant in infectious diseases Dr Michael Jacobs talked about the Royal Free London’s high level isolation unit and the trust’s role in the recent Ebola outbreak.

He began the talk with a brief history of the unit, explaining that Coppetts Wood Hospital, founded for the treatment of infections including smallpox, scarlet fever and diphtheria, became part of the Royal Free Hospital group in the 1960s.

During the 1970s, the Trexler isolator tent - a large plastic tent which fits around the patient’s bed - was developed. The tent is still used in the unit today. Inside the tent, air pressure is lower, which means air flows from the outside in. This helps to contain the infection and protects staff working around the tent. The first case of Ebola in the UK was treated at Coppetts Wood Hospital in 1976.

The infectious diseases unit moved from Coppetts Wood Hospital to the Royal Free Hospital in 2008 where it was renamed the high level isolation unit (HLIU).

Dr Jacobs describes the unit as “a hospital within a hospital” and a member of staff is always on call. The unit contains two Trexler isolators and an on-site laboratory, which includes a small tent similar to the patient Trexler isolator. Dr Jacobs said that the most important back office function of the unit is waste disposal; the HLIU deals with highly infectious waste and can sometimes use 80 waste bins in a day.

Dr Jacobs said the unit was an incredibly important factor in the decision of the 1,000 NHS workers who went from the UK to West Africa during the recent Ebola epidemic and that, in a very small and distant way, it played a part in the fight against Ebola. Altogether, 27 patients were treated for Ebola outside of West Africa, three of which were treated at the Royal Free Hospital.

Dr Jacobs said: “We knew almost nothing about Ebola before the recent epidemic and the team used first-in-the-world therapies to fight the disease.” Using medicines that had never been used in humans before was something Dr Jacobs said he never thought he’d experience in his career.

Dr Jacobs also praised Breda Athan, senior matron in the HLIU, and all the Royal Free London staff who supported the HLIU team during this time. He said it was an enormous credit to the organisation and a fantastic example of teamwork.

The Royal Free London regularly holds free medicine for members’ events which are open to patients, staff and the public. You can also support the trust and strengthen our three hospitals’ links with the local community by signing up for membership, but you do not need to be a member to come along.