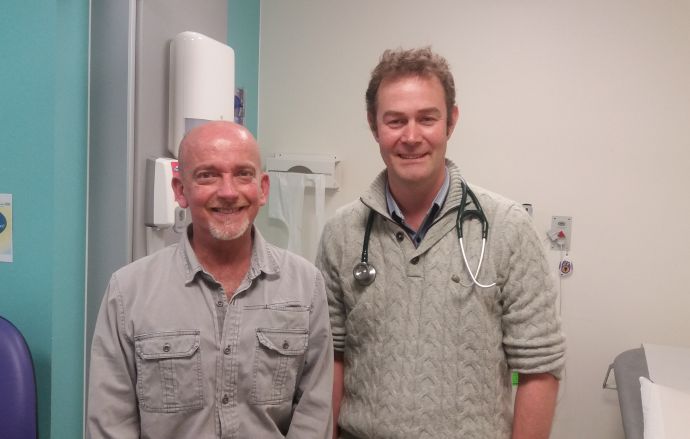 A Royal Free Hospital patient will celebrate how the NHS saved his life – on national television tomorrow evening.

As part of the 70th anniversary celebrations of the NHS, Simon’ Bostic’s inspiring story is being told on ITV Tonight on Thursday 24 May at 7.30pm. 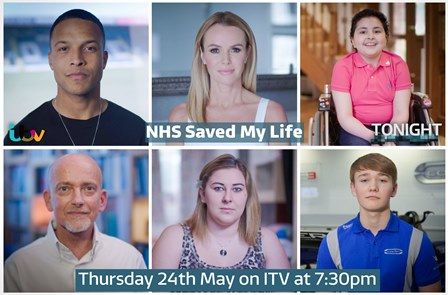 It’s 45 years since Simon became the first ever recipient of a successful bone marrow transplant from an unrelated donor. But Simon’s interaction with the NHS hasn’t stopped there as he’s still under the care of several departments at the Royal Free Hospital including immunology, respiratory medicine and colorectal surgery and he returns regularly for check-ups and on-going treatment.

Londoner Simon was born with Chronic Granulomatous Disease (CGD), an extremely rare and life-threatening hereditary primary immune deficiency that caused his bone marrow to produce faulty white blood cells that could not fight bacterial infections. It meant any infection, however harmless to other children, could prove fatal for him.

Doctors told Simon’s parents, Elisabeth and Roger, that without a bone marrow transplant their son would not survive. However, none of Simon’s relatives was a suitable donor. Simon’s older brother, Andrew, had already died aged two-and-a-half of the same condition as they both had very rare tissue types. This meant it was almost impossible to find an unrelated donor due to the lack of any suitable bone marrow registers.

When a donor was finally found it was too late for Andrew who died of septicaemia. However Andrew’s diagnosis meant Simon was tested at birth and, armed with this knowledge, Elisabeth enlisted the media’s help to find the rare donor that Simon needed to avoid near certain death.

Within two months, the campaign had attracted thousands of people to get tested to see if they were a match for Simon. Incredibly, one of those people was found to be a suitable donor and Simon’s transplant went ahead when he was just 18-months-old.

The headlines about Simon’s transplant reached British-born Shirley Nolan on the other side of the world. Shirley’s young son, Anthony, was desperately ill and in a very similar situation to Simon, with a rare disease needing a transplant from an unrelated donor. The success of Simon’s transplant inspired Shirley to return from Australia to the UK immediately in the hope that Simon’s doctors could also save Anthony.

Sadly Anthony died aged seven in 1979 but Shirley went on to create the world’s first bone marrow (or stem cell) register which currently has over 500,000 potential donors on its database. Since Simon’s transplant approximately one million stem cell transplants, using cells from unrelated donors, have been carried out worldwide.

Simon, 47, said, “Such a lot has changed in the 45 years since I had my transplant and advances in medical science have been extraordinary.

“When it came to getting a match for me the odds were completely stacked against us. My tissue type was so rare there was only a one in 50,000 chance of a match. In those days children with my condition did not live past early ¬childhood, so the fact I am still here is pretty miraculous.”

The search for a donor spanned several continents, but a donor was found near Simon’s Cambridge home.

Friday April 13 1973 was Simon’s lucky day. His donor underwent a procedure to extract bone marrow from her hips which was shortly later transplanted into Simon’s blood at the Westminster Children’s Hospital in Pimlico. After several weeks of anxious waiting, Simon’s parents learned that his body had not rejected the graft and had started producing healthy white blood cells. For the first time in medical history, such a procedure was deemed to have been successful.

Simon had to return back to hospital regularly to check that he was still producing healthy white blood cells and there were no signs of infection. However, due to this treatment being so experimental, pushing the boundaries of what was possible at the time, the team had been overly cautious with the graft and, wanting to avoid too much risk of him rejecting the bone marrow, only grafted 12%.

It was effective in the short term and saved Simon’s life but over time, it became apparent the graft had been insufficient and by the time he was seven-years-old when he was admitted to hospital with a severe chest infection, he had no healthy white blood cells. Once again, Simon had CGD. However, by this point antibiotic treatments had improved.

Simon has been determined to enjoy life as much as possible and being left out of things was not an option for him. Although as a child he was told not to take part in contact sports or swim in the sea he insisted on being allowed to use the climbing frames like all the other children – an attitude he has maintained to this day.

Simon said: “I am as determined and steadfast as ever to go on doing as much as I reasonably can.”

This, with the understanding and support of his doctors includes lots of travelling. After graduating from university with a degree in modern languages, Simon embarked on a career in travel and became a tour guide leader. His adventures are now more sedate but in the past have taken him through Central America, trekking along the Great Wall of China and to view some of the world’s greatest wildlife, such as tracking gorillas in Uganda.

Simon’s care at the Royal Free Hospital continues, led by the immunology team at the Institute of Immunity and Transplantation.
He said: “I’ve had to have multiple operations and my life has been saved here many times, especially recently. I can’t speak highly enough of all the staff who have been involved in my care which is very complicated.

He said: “I have always lived with the shadow of death hanging over me and even now I know there will be a time when I develop an infection and the doctors won’t be able to cure it. I’ve been through a lot of stress and trauma, but I’m grateful for the life I’ve been given because the chances of me surviving were negligible.”

Simon’s consultant immunologist, Dr David Lowe, said: “Myself and the team have treated Simon for years. He is always so positive despite the countless interventions and setbacks he has had to endure over the years. Without the NHS Simon wouldn’t be here with us today but he really is an incredible individual who is an inspiration to us all.”