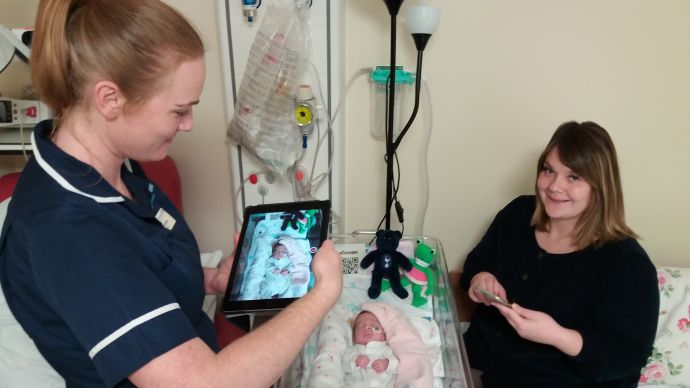 Parents of premature or sick babies being cared for at Barnet Hospital’s specialist neonatal unit are now waking up to a very special message.

Thanks to secure messaging technology vCreate, a parent who signs up to the system can receive a video or picture of their baby, taken by a member of staff working the night shift, which comes through to their e-mail. Staff scan an individual QR code located in the baby’s cot and that allows them to film or take a photo of the baby on a tablet. An alert goes to the parent’s designated e-mail address enabling them to access the video or photo.

Miranda Ryan, the senior nurse on Starlight ward, the neonatal unit at Barnet Hospital, who led on the project, said: “It can be so hard for parents to leave their baby behind and go home but often they have no alternative as they have other children or fathers have to return to work. It might be more than 12 hours before they see their baby again. This way they can feel closer to their child as we can show them having a feed, or during nappy care or sleeping.

“We launched vCreate at the beginning of February and parents tell us they love getting the picture or video of their baby.”

Samuel Holland was born in December to Enfield couple Jana Catlosova and Robert Holland. For Jana the ability to see Samuel, who weighed 2.3kgs when he was born at 33 weeks, when she can’t be there was even more important because a cold meant she couldn’t be on the ward at all for two long stretches of 10 days each. 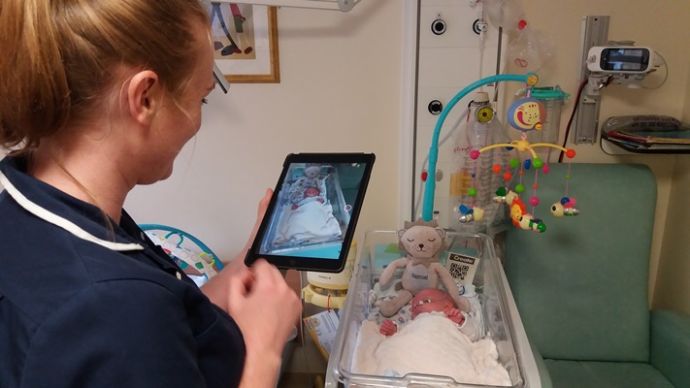 Jana said: “My husband and I work as child-minders so catching colds comes with the territory. My other son also had a chest infection so he and I both ended up on antibiotics and there was no way I could come and see Samuel. My partner, Robert, was able to come in and of course he could take pictures and give me updates but it has been lovely to get these overnight images with a little message.”

Amelia Colley’s daughter, Serafina, weighed just 850 grams when she was born at 29 weeks. It is hoped she will be back home soon in plenty of time to celebrate Mother’s Day on 22 March together with Amelia and her partner, James. Serafina’s actual due date was 21 March.

Amelia said: “It was so special to receive a Valentine’s Day message from my daughter complete with animations – some of the nurses are very creative! I really love getting the messages, especially when I’m up at night expressing milk. It just helps so much to see your baby.

“The system feels very private and although I can share the image by tapping in other e-mails the image is only available to share for 24 hours. It’s good to be able to share with the grandmothers. Another really good feature is that I can comment on the picture and the staff get to see that and see how grateful I am.”

Miranda Ryan added: “This is all part of the work we are doing to achieve better family integrated care – this is a model that supports and educates parents and carers to become integral to their baby’s care as soon as they are admitted to the neonatal unit in partnership with the neonatal team. Having vCreate means parents continue to feel involved in their baby’s care, even overnight.”

The vCreate service has been made possible by the generosity of the Royal Free Charity who have funded it.