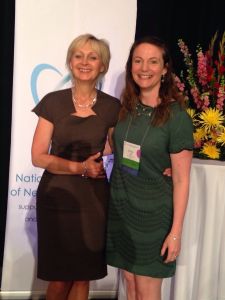 Betty, who is also a consultant neurodevelopmental therapist and honorary lecturer at University College London, was recognised as one of the very first therapists to work in a neonatal intensive care unit and for her contribution to teaching other healthcare workers about developmental care in the UK. Betty worked to establish one of the first comprehensive developmental follow up programmes for pre-term infants and their families, which has now been replicated across the UK. She also co-authored the content for the first course on teaching therapists about early intervention with babies with brain damage.

The award was created by the association to honour neonatal occupational therapists, physical therapists and speech-language pathologists who contributed to the advancement of neonatal therapy.

Betty said: “I’m very grateful to my colleagues in the field who took the time to submit the nomination, it was a very great honour to be recognised. I am the first person to have been given this award outside of America so it is especially positive in that it demonstrates that the UK has neonatal therapy services to be proud of.”