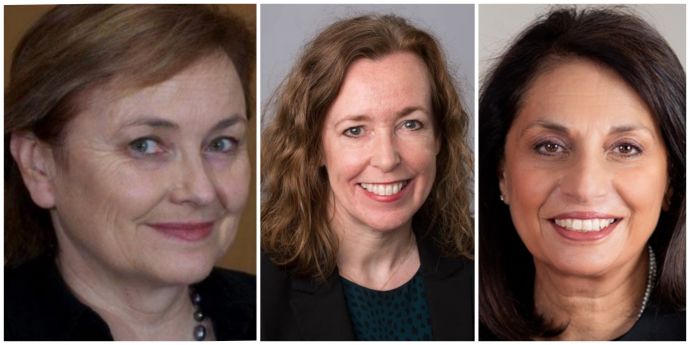 The Royal Free London has appointed three new non-executive directors to its board.

Baroness Claire Tyler, a life peer in the House of Lords, Dr Mohini Parmar, primary care lead and chair of North West London Clinical Commissioning Group, and Sarah Rapson, executive director of supervision at the Financial Reporting Council (FRC), will begin their new roles next month. Their appointments were confirmed by the trust’s Council of Governors at its most recent meeting.

Baroness Tyler of Enfield has previously held a number of senior positions within government, including director of the vulnerable children’s group at the Department for Children, Schools and Families, in addition to being the former chair of the children and family court advisory and support service and the former chief executive of the charity Relate. Baroness Tyler is currently Liberal Democrat spokesperson for mental health in the House of Lords.

Dr Parmar is a senior partner of Barnabas Medical Centre in Ealing. She has extensive experience in leading commissioning groups and was previously chair of Ealing Clinical Commissioning Group and vice-chair of Ealing health and wellbeing board.

Sarah, who is joining the Royal Free London board as an associate non-executive director, is responsible for leading the FRC’s supervision division and its work to enhance audit quality. She is also the senior independent director of North Middlesex University Hospital NHS Trust.

Professor Sir Chris Ham, who has been a non-executive director of the Royal Free London since January 2019, will stand down from the board in December.

Baroness Tyler said: “I am very much looking forward to taking on this new role at such a critical time for the NHS – I’m particularly pleased to be serving the residents of this part of north London, where I have lived and worked for most of my life.”

Dr Parmar said: “I’m delighted to have been appointed to the board of the Royal Free London and I am pleased to be able to bring my experience of NHS system leadership to this role.”

Sarah added: “I am looking forward to taking my place on the board of the Royal Free London and playing my part in supporting its fantastic staff as they continue to provide outstanding healthcare to the patients they serve.”

Mark Lam, chair of the Royal Free London, said: “I would like to welcome our three new non-executive directors, who bring with them a wide range of experience and expertise.

“I would also like to thank Professor Sir Chris Ham for his important contribution as a non-executive director for the past three years. In particular, he has been instrumental in raising the profile of population health and the importance of reducing health inequalities across north London. On behalf of the board, I would like to wish him well for the future.”