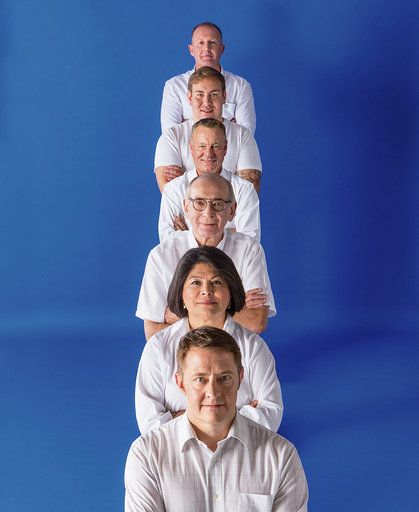 When Martha Myers learnt that her husband needed another kidney after his previous transplant had started to fail she didn’t hesitate to offer hers.

Although Martha, 60, and her husband David, 70, were not a match they decided that the best chance of a donated kidney would be to join the National Living Donor Kidney Sharing Scheme (NLDKSS).

In September 2017, during a matching run,  which happens four times a year, Martha and David were matched in a three-way exchange with best friends Lee Bennett and Ryan Mace and father and son Steve and Ben Abbott.

On the same day, 13 September 2017, the chain came together and the surgery was carried out.  The kidneys were removed from the donors in the morning at three different NHS hospitals and transplanted into the patients in the afternoon.

Martha's kidney was transferred 130 miles up the M1 from the Royal Free Hospital to Nottingham City Hospital and given to Lee Bennett. Lee’s best friend Ryan Mace was, at the same time, in surgery having his kidney removed to be donated to Ben Abbott in London at St George's Hospital.

Meanwhile Ben’s dad Steve donated one of his healthy kidney’s to David who’s surgery was carried out back at the Royal Free Hospital.

A year on and all six members of the chain agreed to meet for the first time to be interviewed for an article and which appeared in the Guardian’s Weekend magazine.

It is unusual for recipients to meet their donors let alone for all six in a three-way chain to get together.

David explained that he was very keen to promote the scheme and how ‘relatively easy it is to do and what effect it can have’.

“Meeting up with Lee, Ryan, Steve and Ben was one of the most memorable days of our lives,” he added.

David’s donor Steve Abbott, lives in the US and joined the others members via FaceTime and was photographed separately and added to the group shots.

David had his first kidney transplant from a deceased kidney donor in 1999, after nine years of dialysis.  The kidney worked for 18 years but after it started to fail he was told by experts at the Royal Free Hospital that he would need another transplant.

David said initially he hadn’t wanted his wife to her to go through with the kidney donation however, she managed to convince him.

“She made me realise I had to do it – not just for myself, but for her,” he explained.

“I also believe that being in the shared scheme gave me a better opportunity of good match.”

He added: “Some people say, ‘You’re unlucky because you’ve been ill so long’. I’m lucky. I’m lucky that Martha came into my life and I’m very lucky that I’ve got this kidney. I’ve got a chance for us to go and enjoy ourselves.”

“I want to highlight the fantastic care and treatment we received from the renal team and all the staff at the Royal Free Hospital.”

David, who chairs the Royal Free London's Organ Donation Committee and is president of the Royal Free Hospital's Kidney Patient's Association, has dedicated the last twenty years helping to give advice to kidney patients and their families to help them understand chronic kidney disease, advising them on where to get more information and also in spreading the word about organ donation.

He says he was also delighted to discover that his kidney had come from a fellow Chelsea fan.

The six members of the sharing chain plan to keep in touch and they are planning to organise a reunion next year.