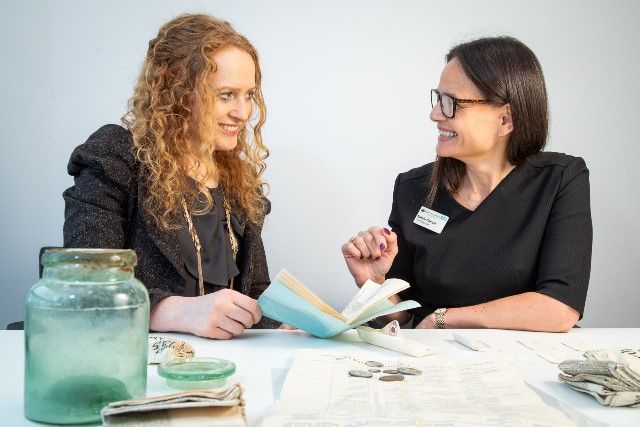 A time capsule dating back 135 years has been discovered during the demolition of the old Chase Farm Hospital in Enfield - providing a unique insight into the late Victorian era.

The documents contained within the capsule – a glass jar - show evidence of what life would have been like in Victorian Britain when the original building was founded as the Chase Farm Hospital School.

The time capsule was discovered in the hollowed-out cavity of the building’s foundation stone dating back to 1884 and contained a plethora of interesting documents including newspapers and an official record of the board of the Edmonton Guardians.

A statement of account for 1883 lists the names of the guardians and officers of the school which was founded to take poor and orphaned children out of the Edmonton workhouse.

These list, among others, medical officers, nurses and public vaccinators, as well as needle mistress Annie Everdell, miller and baker William Hempston, industrial trainer for girls Emma Hawkes, and lunatic and board room attendant Henry Parker.

The artefacts found in the time capsule included six coins from 1883 and 1884, four Victorian newspapers and a statement of accounts from 1883 for the Edmonton Union.

Business cards from builders and solicitors and a poster of election of guardians for the Edmonton Union were also found in the stash.

The school was officially opened on 27 March 1886, with a ceremony at which, according to local newspaper the Hampstead and Highgate Express, despite the ‘intense cold and uncomfortable weather’, the children entertained with choral and band music.

Natalie Forrest, Chase Farm Hospital chief executive, said: “It is fascinating to think these items have been sitting in the hospital’s foundation stone for 135 years.

"It is an honour to open this time capsule which was buried by the Edmonton Guardians 135 years ago.”

The contents of the time capsule are now being preserved, photographed and documented. Copies of the photos will be placed in a new time capsule being buried in the grounds of the new Chas Farm Hospital.

Historian Professor Kate Williams (pictured with Natalie Forrest) alongside archaeological conservators from AOC Archaeology were on hand to advise when the time capsule was opened.

Professor Williams said: “It is amazing to have to have found this time capsule and it takes us back to 1884 when it was buried and when the building was founded as a school before it became a hospital.

“We know that the Victorian’s loved time capsules but we have not found many of them so far.  This gives a really fascinating behind-the-scenes look at what was happening at the time.  We know that workhouses were brutal places, Oliver Twist really is representative of how miserable they were.

“But we can see that by the late 1800s the Victorians were moving much more into providing humane places for poor and orphaned children where they would be happy. They were also obsessed with people becoming useful members of society.”

Rowan Gillis, conservator at AOC Archaeology, added: “Archaeologists are fortunate to handle items left untouched for decades, centuries or even millennia on a day to day basis but rarely are those items deliberately placed there to be discovered. There is something very special about opening a time capsule and the meaning imbued in the objects placed within it.

“Time capsules capture the public’s imagination as they are a message from the past, intentionally planted to be discovered by later generations.

“The Victorians shaped London and helped build the city we know today but their time capsules also show that they expected it to go on changing and evolving long after they were gone.”

Frank Bayford, former chief pharmacist at Chase Farm Hospital, local historian and author of ‘Memories of Chase Farm’, said: “In all the years I worked at Chase Farm, and subsequently explored all the history of the site from its days as a school for pauper children, I never heard about the existence of a time capsule so this has come as a fantastic surprise.

“I thought I knew everything there was to know because I’d interviewed so many people over the years – including former pupils. I also have a personal connection to the school because my great grandfather was the head gardener here for 32 years - arriving in 1889, three years after its official opening.  I also spent most of my professional life here and retired in 1988.  I can’t wait to find out what’s in it and how it will add to what we already know.”

The new £200 million redevelopment of Chase Farm Hospital opened last year and replaced the old Chase Farm Hospital, where some parts of the building were more than 130 years old. The original site has been sold and will be redeveloped with new houses and a school.