Gary, who now works as an ambassador for Spurs, was given a tour of the Tottenham Hale Kidney and Diabetes Centre by Dr Jenny Cross, dialysis lead, and he chatted to patients receiving dialysis. He said the centre was “like a breath of fresh air”. 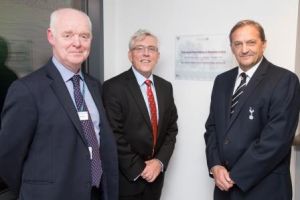 He opened the unit, in Hale Village, alongside David Sloman, the chief executive of the Royal Free London and Dr John Connolly, clinical director of nephrology, renal transplant and urology.

The centre has 48 dialysis stations, with capacity to treat 266 dialysis patients each week, and is the largest dialysis unit outside a hospital in the UK. It opened to patients in April, replacing the services previously provided at the North Middlesex University Hospital in Edmonton. Services have also moved from the Mary Rankin unit at St Pancras Hospital and the Highgate dialysis unit.

Five Royal Free London consultants run clinics at the centre and where possible patients are supported to carry out dialysis and other therapies at home.

The centre will offer follow-up clinics for patients who have just had a transplant; transplant assessment clinics; renal vascular clinics; and a diabetic eye screening service for diabetic retinopathy, which occurs when high blood sugar levels damage the retina and which can lead to blindness if not treated.

Gary, who has had type 1 diabetes for 36 years and is an honorary vice president of Diabetes UK, said facilities like the Tottenham Hale centre were vital for the local community.

“Arriving here was like a breath of fresh air,” he said. “Patients will want to come here to these fantastic facilities. This is a really amazing centre and will be a huge benefit to the community. This is a fantastic achievement.”

Dr Connolly praised the staff at the centre and added: “This unit is about preventing patients developing kidney disease and this centre is going to help us do that in Tottenham, in Haringey and in Enfield. There isn’t a single member of this team here who isn’t devoted to achieving that goal.”