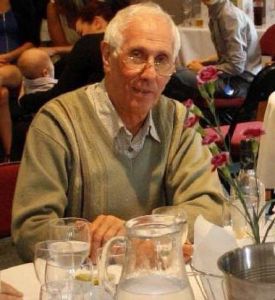 In 1978 the charity Friends of Barnet Hospital (FBH) asked Geoff, who owned a television and radio rental and repair business, to help them set up a hospital radio station.

With the help of friend John Knott, Geoff established a small studio inside the hospital, installing the cabling and equipment himself. On 11 November 1978 Barnet Hospital Radio officially went live.

John said: “I thought it would be a vast task but with the help of the FBH things slowly started coming together. Geoff clearly had a vision of what he wanted to achieve and after many hours of work, mostly in the evenings and at weekends, the equipment came to life and Radio Barnet was born.”

Since then the radio station has been required to relocate twice: first to make way for hospital services in the 1980s, and then again when the hospital was rebuilt in 2003. On both occasions Geoff took it upon himself to lead on the building and installation of the new studios.

Shortly after his retirement in the early 2000s Geoff was asked to take over the running of the Friends of Barnet Hospital shop alongside his wife Ros. He continued managing the shop until just days before his death.

Bob Henderson, chairman of Barnet Hospital Radio and vice chairman of the FBH, said: “Geoff became a familiar face to both patients and staff alike over the years, always looking to widen the range of goods and facilities available, and always keeping an eye out for a bargain to pass on to his customers.

“Hospital radio and the Barnet Hospital shop wouldn’t be what they are today without Geoff Thompson, who built them up from day one.”

Geoff died on Saturday 11 April following a sudden illness. His funeral took place on 22 April at St Mark’s Church in New Barnet and was attended by family, friends and volunteers from Hospital Radio Barnet and the hospital shop.