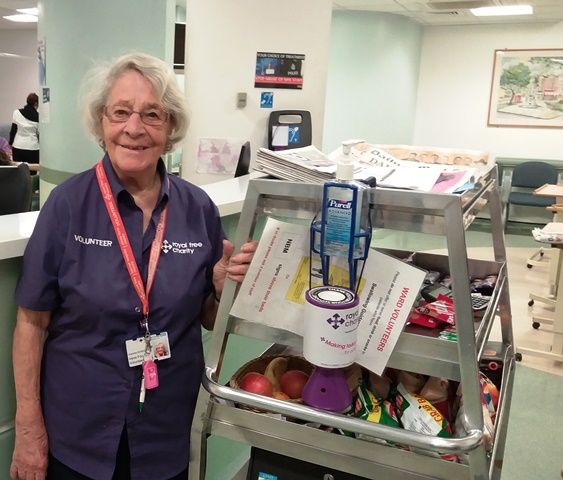 In 1988 Irene Fox’s husband, Fred, passed away at the Royal Free Hospital, after he developed bronchial cancer. He was only 61.

But instead of avoiding the hospital where her husband died, Irene chose to return again and again.

Irene, who is 85, said: “I can’t remember who suggested I volunteer here with the charity but at the beginning it just helped me forget about my problems and focus on something else. Now nearly 30 years later I reckon I’m part of the fixtures and fittings at the hospital!”

In fact next year it will be exactly 30 years since Irene started volunteering with the Royal Free Charity.

Nowadays Irene wheels a trolley around the wards for a couple of hours so people can buy items such as newspapers, snacks and toiletries. The trolley is significantly lighter than when she first started volunteering – it no longer includes a large tea urn.

Irene says she has no plans to retire from her volunteering duties. She says: “I honestly don’t know what else I would do if I didn’t come here two afternoons a week. Of course I take holidays and don’t come in if I’m not feeling well but other than that I’m always here. It’s important to me. As long as I’m well enough to carry on doing it I will.

“I don’t live far away and I often spot people on the ward who I know by sight from my local neighbourhood, even if not by name. It makes me reflect on how lucky I am to still be up and about and I don’t take that for granted. I feel like if I can help I should.”

As well as volunteering at the hospital Irene also volunteers for conservation group Heath Hands on Hampstead Heath once a week.

Jenny Todd, head of volunteering at the Royal Free Charity, said: “Irene is an amazing woman and a real inspiration. We are incredibly proud of her deep connections with the hospital and the charity.”