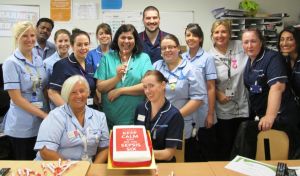 Services and departments around the trust celebrated sepsis awareness as part of the Global Sepsis Alliance World Sepsis Day.

This internationally recognised day brings together people in health care and members of the public to highlight the issue of sepsis around the world.

Sepsis is one of the leading causes of mortality, with an estimated 35,000 deaths in the UK alone, killing more people than breast, lung and bowel cancer combined. Sepsis awareness month is fully supported by staff at the Royal Free London, who make a concerted effort to educate and inform colleagues and patients all year round.

As part of the awareness day, 'sepsis 6' cakes and freebies were presented to our two latest pilot wards at Barnet Hospital (labour ward and emergency department). Both new pilot areas are achieving excellent compliance with the sepsis pathway and there are now sepsis champions in place to help drive improvements. 'Sepsis improvement' is one of the key workstreams that the patient safety programme will be focusing on.

“The midwifery, obstetric and anaesthetic teams have embraced the sepsis 6 pathway; it has made a clear distinction in recognition and timely, prompt action. The sepsis trolley has ensured that equipment and drugs are readily accessible and the antibiotic framework ensures correct medication is given immediately. The pathway has made a clear difference in improving patient outcomes.”