Masseurs have provided 250,000 massages to patients at the Royal Free Hospital, thanks to the complementary therapy service, which was set up nearly 20 years ago. 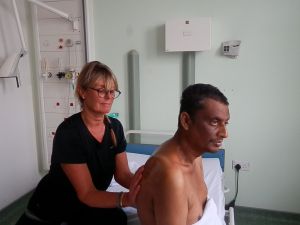 Keith Hunt MBE founded the service in 1994, and he now leads a team of staff who deliver hundreds of massages to patients each week.

Cancer, haematology and dementia in-patients at the Royal Free Hospital are entitled to a daily massage, which helps them de-stress, and can help with recovery. Because the masseurs chat to the patients it can help them feel less lonely and less frightened while they are in hospital. A massage can also give patients pain relief.

But when the service started Keith said most doctors were sceptical.

“A lot of consultants thought it would get in the way of treatment,” he said. “They thought it was alternative therapy and it would lead to us giving patients papaya leaves to try to cure their cancer.

“There was one doctor, Alison Jones, who referred her patients to me. Once the other consultants realised that Alison’s patients were getting a lot of benefit from the massages, they started to come round.

“We work closely with the doctors to ensure that it is completely safe for the patients. We tell the patients that this is an added extra, and it is not going to get in the way of their treatment in any way. The phrase we use is, this is a treat, not a treatment. Part of it is that we are there to talk and listen to the patient. We look after the person, rather than the condition.”

Now other hospitals from across the UK and abroad are keen to learn from Keith.

“I’ve been to New York, to the Czech Republic, to Japan, to tell people there how we do things. There are so many benefits to patients so they want to run their own complementary service. Recently I also went to South Tees and I will be helping to set up the service at King’s College Hospital.”

Ahmed Redwan, 44, who had a liver transplant in July said the massages, delivered by Nickie Williamson, have been a lifeline.

“Nickie has been keeping me going,” he said. “We had to make sure that I was strong enough for the transplant and the massages helped me feel so much better.”

When Ahmed, who has four children and runs a shop in Luton, first heard about the complementary therapy team he thought it wasn’t going to be his thing. However, he soon changed his mind.

“As well as the massage, it was the things that Nickie was saying that helped me. The whole experience was therapeutic. I feel much better whenever I see Nickie.”