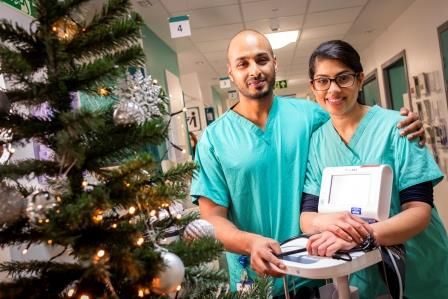 As Santa makes his final rounds this Christmas Eve, husband and wife doctors Deven and Anushka will be doing the same – in the emergency department (ED) at the Royal Free Hospital.

Anushka Saroop-Ramoutar and Deven Ramoutar, both emergency medicine registrars, will spend their third yuletide in a row caring for patients in ED – covering the night shift on both Christmas Eve and Christmas Day.

Anushka said being at a hospital over Christmas can be special, even if you are at work.

“Everyone is in a festive mood and staff dress up in Christmas jumpers and tinsel,” she said. “We get a lot of people coming in to deliver presents and food to us, which is lovely. Last year we had a group of children come round to the children’s emergency department to sing carols. And in the morning we take a group shot of all the staff who are in - so there is a special atmosphere at Christmas.”

As they will be starting work at 10pm, the couple have time for a quick celebration – as well as catching up on sleep - at home before they come in to the hospital on Christmas Day.

Anushka and Deven say they always volunteer to work at Christmas as both their families are abroad and they don’t have any children.

Deven said: “After our last Christmas shift ends we are going to Toronto for a break.

“Anushka’s family will be coming over from Trinidad to Toronto as well so it will be a big family gathering. I haven’t been back for two years so it will be amazing to see home again.”

Although the couple are eager to see their families again, they are really happy living in London and working at the Royal Free Hospital.

Deven said: “As soon as we came here, we knew we wanted to work here. The staff here are amazing, the supervisors are very supportive and the patients are very appreciative of what we do.”