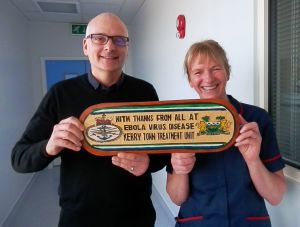 The team responsible for caring for patients infected with the Ebola virus say they are “touched” after receiving a very special gift from military health workers treated at the Royal Free Hospital’s infectious diseases unit.

A wood carving, created by a former patient at one of the UK military hospitals set up in the Sierra Leone capital Freetown, has been given to the hospital as a thank you for caring for several UK servicemen and women over the past few months.

Since August 2014 the hospital has successfully treated three British healthcare workers who contracted the virus while caring for Ebola patients in Sierra Leone, including a military health worker, Anna Cross.

The infectious diseases team has also cared for several military health workers who may have been exposed to the Ebola virus during their work in Sierra Leone, and who were later given the all clear.

These patients included two military health workers who had been working at a British-run Ebola treatment unit (ETU) in Freetown. While working at the military hospital the health workers successfully treated a man whose whole family had died from the disease. Touched by his tragic story, staff at the ETU clubbed together to pay for the funeral costs of his loved ones.

To say thank you the man made a wood carving for  the ETU staff to pass on to the Royal Free London team.

The carving, which bears the standard of the President of Sierra Leone, reads: “With thanks from all at Ebola virus disease Kerry Town treatment unit.”

Dr Michael Jacobs, infectious diseases consultant at the Royal Free London, said: “We were so touched to receive this gift. The story behind the carving really brings home the realities of what is happening in Sierra Leone and how important the UK’s contribution to the humanitarian effort has been.”