Volunteers at the Royal Free Hospital (RFH) have designed colourful get well and happy birthday cards for recovering patients. 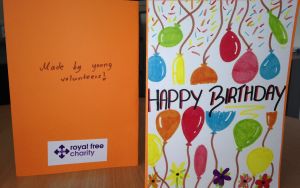 Ellie Lachs, a 16-year-old student at the Jewish Free School, was part of a team of RFH volunteers who created the colourful cards to improve patient experience around the wards.

Ellie said: “The wards asked if we could design something colourful for the patients and we thought birthday and get well cards would be a good idea. I was at the RFH for four weeks as part of a summer placement during my school holiday and I noticed that some patients have no living relatives, so it was nice to be able to give something to them to show they’re still being thought of.

“We created the cards using felt pens and card from the wards and they were then photocopied. It took about an hour and we made them bright and quite neutral so that they could be given to anyone. It is a huge hospital with so many patients, but small things like this are nice to do and great to be a part of. I hope the patients enjoyed their cards, it was great fun making them.”