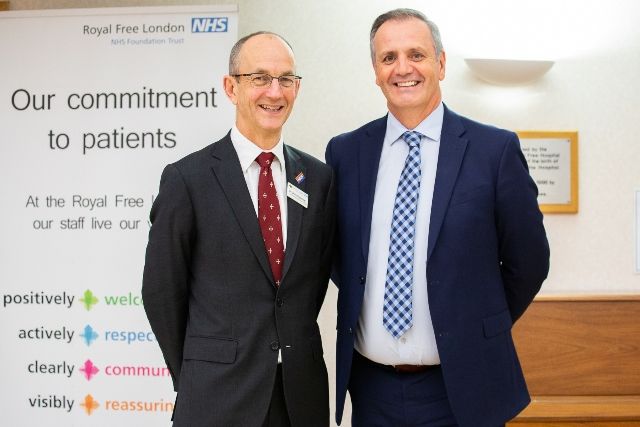 Speaking at last night’s annual Marsden lecture, Derek Feeley, president and chief executive of the Institute for Healthcare Improvement (IHI) praised the Royal Free London (RFL) for the improvement work it was doing but also challenged the organisation and each member of staff to go even further.

Dr Streather said: “Doing what we’re doing a bit harder isn’t the solution. There needs to be a real focus on quality and improvement. Partnerships will also be absolutely crucial.”

Mr Feeley echoed Dr Streather. At the beginning of his talk, ‘Is it time for radical redesign?’, he warned: “The solution is not running faster. We need genuine transformation. We need to be proactive about engaging with people. We are talking about a paradigm shift.”

Mr Feeley said there were a variety of things that had been proven to deliver better health outcomes and patient satisfaction including promoting wellbeing in patients by asking them ‘What matters to you’, to creating ‘joy in work’, standardising what makes sense, as well as customising care and support to the individual and making it easier for staff to do their job well by getting rid of requirements and activities that added no value for patients, their families or clinicians.

Mr Feeley added: “The balance of power has to change. We need to listen to our patients and our communities. It’s all about engaging patients in decisions affecting them.”

Mr Feeley highlighted the Nuka System of Care developed by Southcentral Foundation in Alaska, which is recognised as one of the most successful and innovative primary care systems in the world.
He told the audience it had achieved its success through pioneering a community-led model of ‘customer-ownership’, in which users provide regular feedback to inform the development of services that more effectively meet their needs.

Interestingly Mr Feeley also challenged healthcare providers to return any savings made from improvements to the population they serve for them to benefit from. He said that in places where this approach had been adopted communities had actually become measurably healthier, requiring fewer visits to hospital, as they had chosen to invest that ‘saved’ money into prevention, such as community centres offering fitness and wellbeing.

Mr Feeley added that it everybody had the ability to change things and urged the RFL’s workforce to grasp the opportunity to make radical change. He shared the story of Jen Rodgers, a paediatric nurse from the Royal Alexandra Hospital in Paisley, who started the ‘what matters to you’ worldwide movement, which had helped give patients a voice.