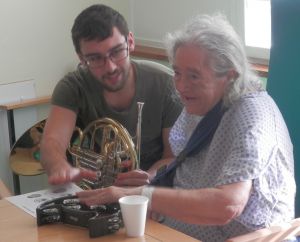 A temporary ward designed to speed up patients’ recovery and free up much-needed Royal Free Hospital beds has reopened for winter.

Building on last year’s success, ward 6 East will give up to 25 patients the chance to socialise and start looking after themselves in preparation for discharge to their home or a community-based rehabilitation centre.

The ward’s reablement therapy service was launched last year in an effort to relieve pressure on beds used for acute care and help meet A&E targets during the busy winter season by taking patients out of acute wards at the right stage of their recovery.

Since the ward opened last week therapists have been working alongside nurses to encourage patients to do more for themselves including going to the bathroom, dining and socialising in the communal area. They have also been given the chance to take part in various activities such as weekly music sessions and exercise classes.

“This ward has created an opportunity to think about doing things differently,” said Trudie France, clinical manager for therapy services. “Elderly patients’ ability to carry out the basic daily living activities often deteriorates rapidly when they remain inactive in hospital for too long. On 6 East, therapists work alongside nurses to encourage patients to do things for themselves rather than have things done for them. The therapy service continues at weekends, so patients retain or regain their ability to look after themselves in preparation for discharge.”

Anne Thom, 73, had been recovering from a fall for three weeks before she was moved from her acute ward to 6 East last week.

She said: “Here I have to get up and do something. You can go to the bathroom yourself here whereas you couldn’t on the other ward. It really helps. I feel like I am recovering quickly."

Joan Hunter, 88, added: “I think I am getting better quicker because I am being asked to do more things. I feel like they trust me.

“I just feel better if I am doing something. I don’t like to sit back and watch other people do things.”

An assessment of last year’s ward activity suggested that 6 East helped reduce the number of operations cancelled due to lack of beds and waiting times for beds following patients’ arrival at A&E. Of those admitted to the reablement ward, 37% of those waiting for a rehabilitation place no longer needed it and went straight home.